This is it. Days and months of practice, endless hours of work and many sleepless nights- all for a single day. And, what a day. Porsche, Toyota and Audi- each one of them got a whiff of the victory pie at some point of time. But, winning's winning, it doesn't matter whether you win by an inch or a mile. And it was the #2 Audi which won the day, not by an inch or a mile, but by three entire laps. The winning car was being driven by Marcel Fassler, Andre Lotterer and Benoit Treluyer. This win makes this the 13th Le Mans title for the German manufacturer, Audi. 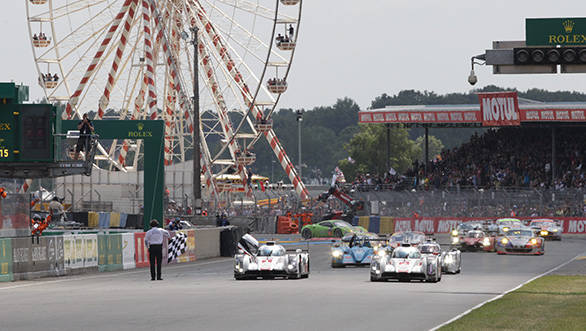 The last year's winners finished 2nd this year in the #1 Audi. After the horrific crashes is practice as well as qualifying and the technical issues, their final standing is really commendable. The last place on the podium went to the #8 Toyota which is impressive considering the fact that the Japanese company returned to Le Mans only in 2012.

Coming back to Le Mans after 16 years hasn't turned out great for Porsche. But they did have their moments. They started the race really well and the #20 Porsche was even leading at a point of time. The #14 Porsche was also close-by, almost during the entire race. Almost. That would be the word Porsche must hate right now because both their cars had issues just few hours before the end, forcing them to retire. 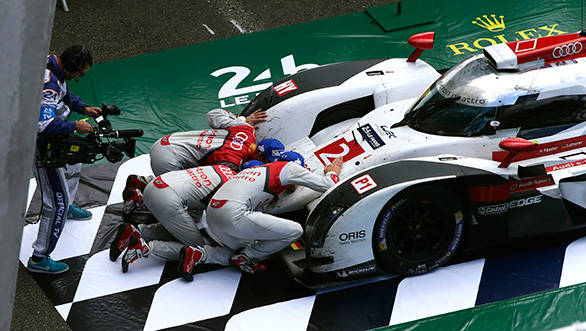 The #7 Toyota, which qualified on pole position and led the race for most of the part, was forced to stop due to a technical problem. The drivers were beside themselves with grief after this. Alex Wurz tweeted, "I am devastated and want to cry! Leading the LeMans 24h race for 14hpushing every inch along the wayand now technical breakdown." Even the #3 Audi had to retire after a crash when the weather deteriorated.

In the LMP2 class, Simon Dolan, Harry Tincknell and Oliver Turvey won the title in their Jota Sport Zytek Z11SN-Nissan. Things didn't go well for Murphy Prototypes and Karun Chandhok though. Their car was one of the 19 cars that retired from the race which started with 55. The car aquaplaned while Karun was driving thereby leading into a crash. This damaged the suspension and the repair took about 25 laps worth of time. Chandhok did some spectacular driving after the car came back in the race. He even posted one of the fastest laps in the LMP2 category. Later a steering issue popped up forcing the team to retire due to safety concerns.

Meanwhile, the GTE Pro class was won by Ferrari's AF Corse team. The team's car was being driven by Gianmaria Bruni, Giancarlo Fisichella and Toni Vilander. The GTE Am class title went to #95 Aston Martin Racing car. The win had too many emotions attached as Aston Martin Racing suffered the loss of Allan Simonsen last year in the very event. The team had an all-Danish lineup of Kristan Poulsen, David Heinemeier Hansson and Nicki Thiim.

After the race, Alex Wurz tweeted- You don't win at Le Mans, it lets you win. The teams would have started chalking out their plans for next year by now. No matter what happens, these men will keep coming to a race that takes not only luck, but courage, skill and perseverance to the very limit.