The atmosphere in the Toyota camp was quietly confident. After all, with less than three minutes to go, Kazuki Nakajima was in the No.5 Toyota and in the lead of the 24 Hours of Le Mans. It would finally be the Japanese marque's turn to win at the big race. Suddenly, though, disaster struck when Nakajima's Toyota TS050 Hybrid lost power and coasted to a halt on the start finish straight. 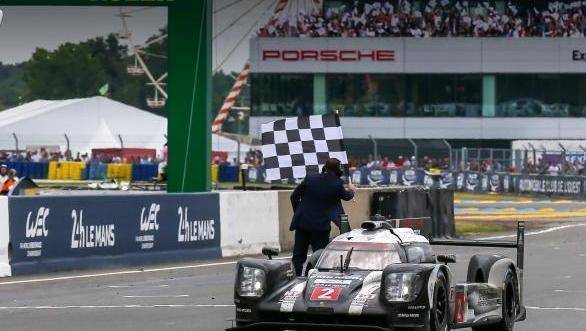 In the Porsche pits, Marc Lieb and Romain Dumas looked astounded and then smiles broke out on their faces. With the Toyota out of the way, it would be the No.2 Porsche, with Neel Jani in the car at that point, that would cross the chequered flag first at Le Mans. It was also the car that had set the fastest time in the qualifying session, which meant that the fastest car also won. If you missed the race, you might be tricked into believing that it had been processional - that the car on pole eventually went right on to win. The truth, though, as Le Mans usually proves, was far from it. But there was no denying that Porsche had managed to make it to the top step of the podium, thus also taking home victory number 18.

While the No.5 Toyota eventually limped across the finish line, it was later disqualified for not completing the last lap within the stipulated six minutes. The No.6 Toyota, with Stephane Sarrazin, Mike Conway and Kamui Kobayashi took second place. Third place at the 24 Hours of Le Mans, in the LMP1 category, went to the No.8 Audi of Loic Duval, Lucas Di Grassi and Oliver Jarvis.

Victory in the LMP2 class went to the No.36 Signatech Alpine driven by Gustavo Menezes, Nicolas Lapierre and Stephane Richelmi.

The win in the GTE Pro category went to the No.68 Ford GTE of Joey Hand, Dirk Muller and Sebastien Bourdais. While the No.62 Scuderia Corsa piloted by Bill Sweedler, Townsend Bell and Jef Segal took the win in the GTE Am class.