Lamborghini will be launching the Huracan Evo Spyder in a few hours, the soft-top iteration of the Huracan Evo launched earlier this year. Carrying all the same updates as that car did, including the tweaked 5.2-litre naturally aspirated V10 engine which now outputs 640PS and 600Nm torque, as well as all-wheel steering and the Lamborghini Dinamica Veicolo Integrata (LDVI) active vehicle dynamics system. 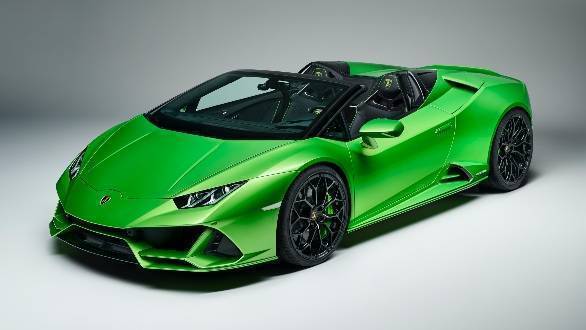 The Evo Spyder is a couple of tenths off the sprint times of its coupe sibling, with a 0-100kmph time of 3.1s, owing to the 120kg of extra weight (in the roof mechanism and chassis strengthening) it carries around, tipping the scales at 1,522kg (dry). Lamborghini still claim the same 325kmph top speed for the Evo Spyder, and the bonus of being able to drop the roof will likely command a slight premium over the coupe's Rs 3.73 crore (ex-showroom) price tag. Stay tuned to OVERDRIVE for the updates right from the showroom floor.