Inking the Gumpert Apollo may have been a welcome change for tattoo artist, Aleksy Marcinow. Before setting out on the herculean task assigned to him by the London Motor Group, the artist said, "It had to be right first time and I had to work with the angles and curves in the car but at least the Gumpert Apollo didn't move or scream."

Catch the artist at work on the Gumpert Apollo

Not that the Apollo needs any more body work to grab eyeballs on the road. However, we agree that the result is stunning. Unveiled at the Gumball 3000 Rally to a bevy of click-happy auto lovers gathered at the Regent Street in London, the supercar flaunts a unique pop-artsy bonnet. Although, at the speeds which the Apollo boasts, we wonder if the delicate detailing will be lost in an orange flash, as it whizzes past. 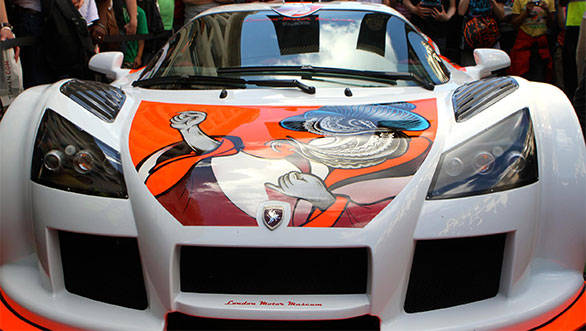 This looker was revealed along with ten luxury cars from the London Supercar workshop, also part of the London Motor Group. It will probably head for display at their Motor Museum, where it will join the likes of exotic machinery including the 1966 and 1989 Batmobiles.