Mahindra 2 Wheelers has tasted success with the launch of the Centuro motorcycle. However, since its launch, the competition has also ramped up in the 100-110cc segment. The new entrants include Hero's Passion Pro TR, TVS, Bajaj and many more. To counter this, Mahindra has launched the Centuro edition.

The Rockstar is a stripped down version of the Centuro and gets new body graphics. Other features which have been omitted include the stainless steel cover on the exhaust, remote key fob, digital dash and anti-theft alarm. M2W though has retained the flip-type key and LED pilot lamps. 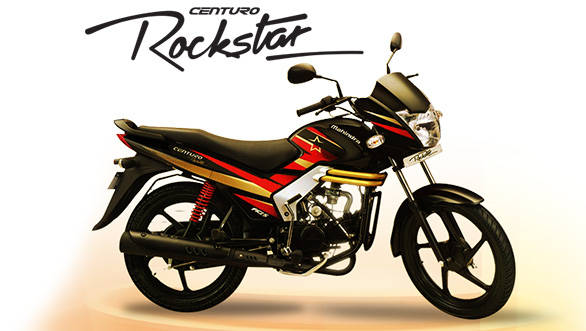 The Mahindra Centuro Rockstar gets the same 106cc engine which powers the other variants. The singler cylinder MCI-5 motor makes 8.5PS of power and torque and is mated to a 4-speed transmission. Mahindra claims a lofty 85kmpl fuel efficiency from the Centuro and comes with a five year warranty.

Mahindra will also be launching the Centuro with a front disc brake soon. We had spotted it testing recently.