Mahindra's all new mini-truck, the Jeeto has been launched in India at a starting price of Rs 2.35 lakh, going up to Rs 2.70 lakh for the top-end variant - all prices are ex-Thane. There are eight variants to choose from, depending on payload, engine and deck lengths. The Mahindra Jeeto comes in BS3 and BS4 options. Mahindra says that the Jeeto will cater to the three-wheeler micro- and mini-truck customers. 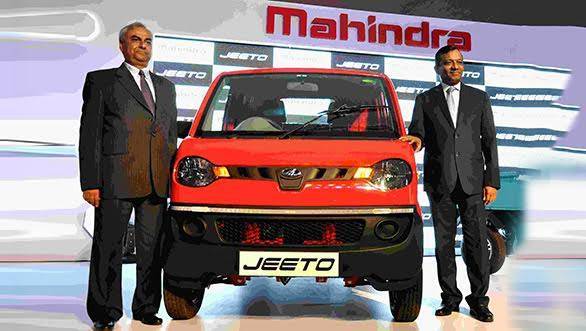 Mahindra rolls out the Jeeto from its new extended facility at Zaheerabad in Telangana. The mini-truck is available in five colours and comes with a two-year/40,000km warranty.

Speaking at the launch of Jeeto, Pawan Goenka, executive director, Mahindra & Mahindra Ltd said, "At Mahindra we have regularly created disruptions in the market with our alternative thinking and the Jeeto with its unique value proposition is a clear validation of this philosophy. A true 'make-in-India' vehicle with a modular platform, the Jeeto is poised to redefine the landscape of the small commercial vehicle industry within India and drive positive change by providing its customers with a higher earning potential. It is also a matter of pride for us that through the launch of this product, we are able to participate in the industrialisation of the newest state of India, Telangana".