Mahindra and Maharashtra State Road Development Corporation Ltd (MSRDC) along with SaveLife foundation have launched the 'Safety under 80' campaign. As the name suggests, the campaign  aims to create awareness about the dangers of speeding.  Through this campaign, the parties involved intend to reduce the number of fatalities on the Mumbai-Pune Expressway from an annual average of 130 to zero by 2020. 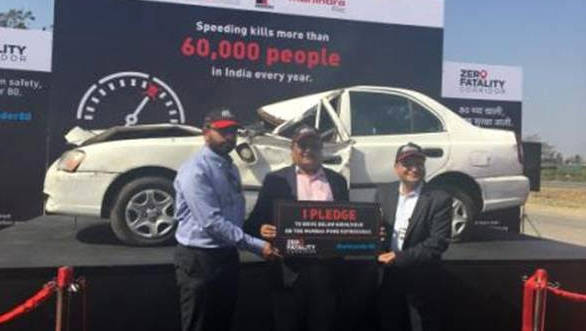 According to the World Health Organisation, speeding is one of the top five factors responsible for causing  road accidents leading to injuries or fatalities. A higher average speed is directly related to the chances of an accident occurring and the severity of the crash. The Mumbai-Pune Expressway has a speed limit of 80kmph. Anyone who has travelled on that stretch knows that very few motorists drive under the legally permissible speed limit.

The 'Safety under 80' campaign aims to educate the Mumbai-Pune Expressway users about the dangers of exceeding the speed limit.  To make the campaign effective, dramatic hoardings as well as installation of crashed cars have been installed on both side of the expressway.