Overnight rains and a track temperature of just 13.3 degrees Celsius were no deterrent for crowd favourite Marc Marquez of the Repsol Honda team who blazed away on a rain-soaked Ricardo Tormo circuit to set the fastest lap time of 1 minute, 40.154 seconds in the Sunday morning warm-up session. The Spaniard seemed to have shrugged off any signs of injury after dislocating his shoulder early in the qualifying session on Saturday afternoon and seemed to be in perfect form on track. Ending the session in a close second place was Aleix Espargaro on his factory Aprilia, clocking a lap time of 1 minute, 40.959 seconds. Most riders following the two were almost a second off their pace, with the third fastest in the session being Valentino Rossi who managed 1 minute, 41.109 seconds on his factory Yamaha. The Ducatis of Alma Pramac Racing ridden by Danilo Petrucci and Jack Miller rounded up the top five in the session. 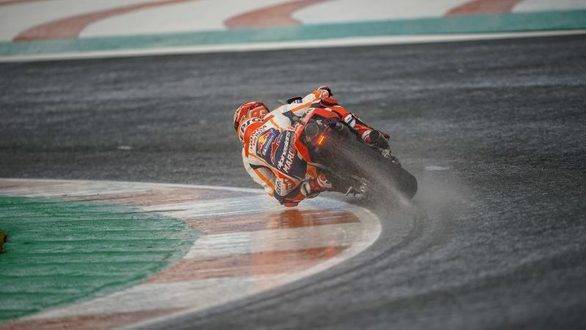 Marquez's lap time today morning was almost 10 seconds off Maverick Vinales' pole setting time from yesterday's qualifying sessions in the dry, of 1 minute, 31.312 seconds given the inclement weather. Marquez also set the fastest top speed of the session, hitting 307.5kmph on the main start-finish straight of the Ricardo Tormo circuit. Rain forecast for the entire day means that the Moto3, Moto2 and MotoGP races are most likely to be run on wet tyres, which should make it even more interesting, considering this is the last race of 2018. Today is also the last time that Dani Pedrosa will race in MotoGP, the Spanish rider having announced his retirement from active racing at the end of the 2018 MotoGP season earlier this year. In fact Britons Bradley Smith and Scott Redding will also be racing their last MotoGP races today, with both bowing out of the premier class. Spaniard Alvaro Bautista, who is riding a Ducati for the Angel Nieto team is also making his last appearance in MotoGP today as he is slated to move to WSBK next year for the factory Ducati team.