March 2014 issue of OVERDRIVE is out on stands now

The March 2014 issue is out and this edition of OVERDRIVE is all about redemption and glory.

Auto Expo organisers redeemed themselves in the 2014 edition of India's largest motor show and put to rest the global embarrassment they had to endure after the 2012 fiasco. This was the country's biggest and most successful automotive event yet and previewed about 50 cars and 31 motorcycles that you will see on Indian roads over the next two years. We have compiled the most comprehensive report of the entire auto show for you, packaged in 30-odd pages of short and crisp news pieces from every manufacturer's stall present at the expo. 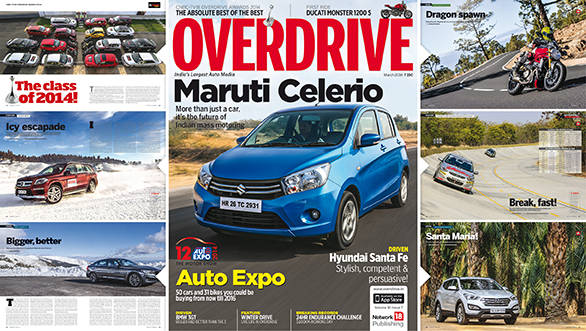 But more than redemption, this issue is about glory.

We bring you an account of the adventures of seven brave OVERDRIVE readers who were a part of the 2014 OVERDRIVE Winter Drive. They gamely tagged along to experience what we think fun really is as we went drifting on Gulmarg's snow-capped roads in Mercedes-Benz SUVs.

We also recognise the best in the industry last year with the 2014 CNBC-TV18 OVERDRIVE Awards. In this issue, we tell you who won what and why they did. So if you're wondering what the winners have over the others that warrants them the honour of holding the SpeedShift trophy, well, you have to read the magazine.

We had some time to kill before we drove down to Delhi for the Auto Expo - an ideal opportunity to revisit a 10-year-old-record set by us and shred it to pieces, and for good measure, set about two dozen new records along the way. The issue carries a blow-by-blow account of the 24 Hours Ultimate Endurance Challenge by OVERDRIVE.

Speaking of Auto Expo, one of the most significant launches announced at the show was the Maruti Suzuki Celerio. We have in the issue the first drive of the latest offering from the country's biggest car manufacturer.

Also included is the Ducati Monster S which was ridden around the world's largest volcano, the bigger and better BMWand the all new.

In the motorsport section, we bring you the mad men of the mental Dakar Rally as well as a preview of the upcoming Formula 1 and MotoGP seasons.

For all this and plenty of more exciting news, views and snippets from the automotive world, grab your copy of OVERDRIVE today.