Racing requires skill, luck and money. And it's usually that last bit that poses a problem for a lot of people. Talented and willing rookies have trouble finding the money they require to go racing, and renting cars becomes a tricky and expensive affair. 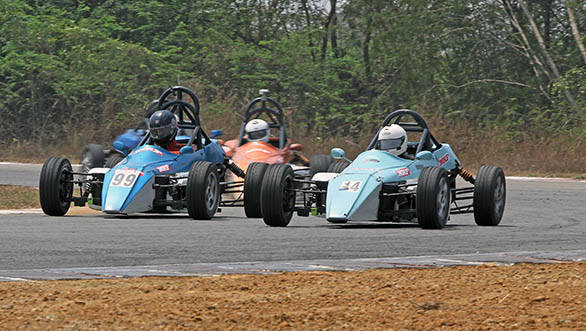 In a bid to bridge the gap between the haves and have nots, Meco Motorsport has introduced the Formula Junior Racing Series (FJRS) the first round of which will be held between April 16 and 17, 2016.

What is the series all about? Well, it's meant to be an affordable stepping stone for rookie drivers, and is a one-make series that will use Formula LGB 1300s that are all run by Meco Racing. Which means all the cars are equal, and your results are down to your skill as a driver. The series will comprise a total of 10 races that are spread over two rounds. The first round, as mentioned earlier, will be held between April 16 and 17, while the second round will be held two weeks later (April 30 to May 1).

All the drivers who will compete in the series have risen through the ranks of the Meco Racing Academy and have been trained to race. Of these 12 drivers, two of whom are Sri Lankan, nearly all are looking forward to moving from karting to racing, and the series hopes to be an efficient and able first step in this direction.

"Our aim is to help young drivers coming straight out of the Racing Academy and with limited racing experience to showcase their skills and book a seat in our Pro Racing Team which takes part in the JK Tyre FMSCI- FLGB4 National Racing Championship." said promoter of FRJS 2016, Akbar Ebrahim.

Ebrahim added, "By racing in the Junior Series, these drivers will get a lot more seat time to further enhance their skills and prepare for the National Championship where they will be competing against experienced drivers."