The next time that you're watching a Formula 1 race, make sure that you don't miss the Safety Car that's being deployed on track when one of those many crashes occurs. This, because the Mercedes AMG GT R that is being put into use in the 2018 season of Formula 1 is officially the most powerful FIA F1 Safety Car of all time. The car, which has already been done duty at the 2018 Australian GP, the season-opener, with Bernd Mayländer behind the wheel, is powered by an engine that makes 585 PS. The car is capable of hitting a top speed of 318 kmph too, which also makes it the fastest FIA F1 Safety Car of all time. The AMG GT R also features driving dynamics of the AMG GT3 racing car, which has spent a significant amount of its development time at the Nurburgring. 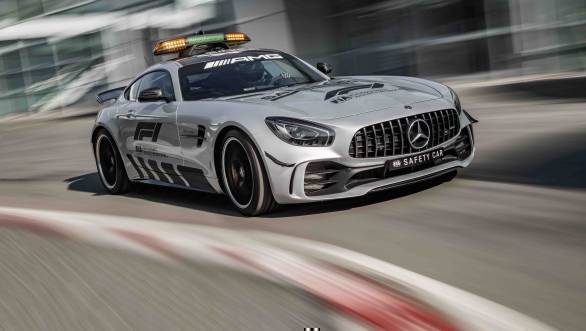 Mercedes-AMG has stated in an official release, that this is the first time that so much motorsport technology has made it onto a production car, in this case the AMG GT R. The car features a 4.0-litre V8 biturbo engine, with active aerodynamics and lightweight construction. The wide front and rear wings allow for an increased track width for optimum grip and higher cornering speeds. 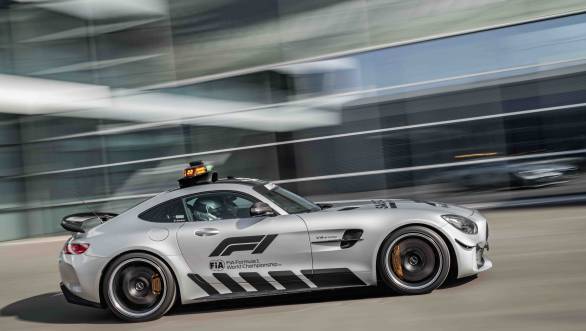 The car also has a front apron with AIRPANEL active air control, and active aerodynamics in the underbody, a large rear aerofoil, and a rear apron with a double diffuser. In addition, the wheels are lightweight, which enhances the driving dynamics. The AMG GT R also features adjustable traction control, active rear-wheel steering and a nine-way adjustable traction control system. 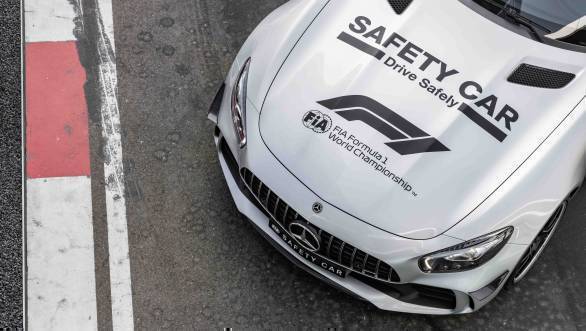 Speaking of the car that he now gets to pilot for 21 race weekends, official Safety Car driver, Mayländer had this to say, "It is an absolute highlight in terms of driving dynamics and is one level higher up still than the AMG GT S of recent years. Of course, ideally the safety car should be deployed as rarely as possible  but when we have to safely bunch up the Formula 1 field and lead it around the track, we will be superbly equipped with the AMG GT R."

Naturally, the Formula 1 Safety Car must adhere to the FIA's strict requirements in that it must be able to maintain a minimum speed level that is fast enough that F1 cars following it do not end up with tyres and brakes that are too cool. While following the Safety Car, the engines must not overheat. The fact that the car only takes 3.6 seconds from zero to 100 kmph, it's got the right technical specifications for the job.

To convert the road-going GT R to the F1 Safety Car, minimum modifications were made - a roll-over protection system, ceramic high-performance compound braking system, all of which are on board as optional extras. On the outside, the car features FIA and F1 car film, and a light bar on the roof. 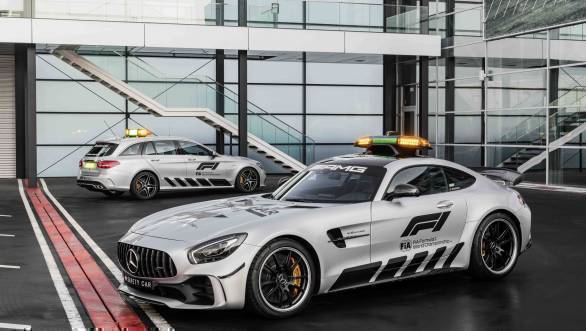 Charlie Whiting, FIA F1 Director, said of the AMG GT R: "When a Safety Car intervention is required during a Grand Prix it's vitally important that we have full confidence in the car's ability to lead the Formula 1 cars around the track safely. That means we need a car which is not only capable of dealing with the extreme demands a Grand Prix circuit puts on a vehicle travelling at high speed, but also one which is capable of setting a pace that allows the F1 drivers to keep tyres and brakes working at the right kind of temperature so that they do not struggle while waiting for racing to resume. With the latest versions of the FIA F1 Medical and Safety Cars, that confidence is once again assured."