Mercedes-AMG GT R and Roadster to be launched in India on August 21, 2017

Mercedes-AMG seems to be on a roll this year. Last month, the German car manufacturer launched the GLC 43 in India at Rs 74.8 lakh, ex-showroom India. Now the performance brand is all set to launch the GT R and the Roadster offerings in India on August 21, 2017. 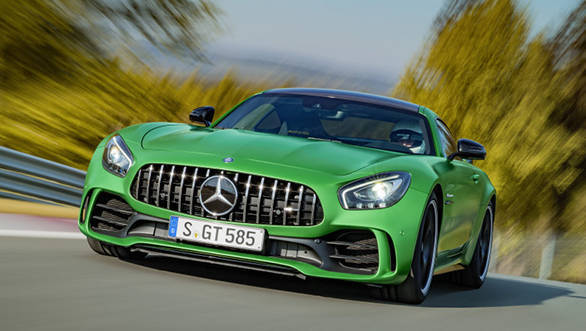 The Mercedes-AMG GT R was revealed at the 2016 Goodwood Festival of Speed. Draped in a loud green scheme that pays homage to its development home, the Green Hell, the AMG GT R is the hardcore track-oriented version of the AMG GT. Powered by a 585PS version of the same 4.0-litre twin-turbocharged V8, the Mercedes-AMG GT R sprints to 100kmph from a standstill in 3.6 seconds and goes on to a top whack of 318kmph, claims the company. Weight has been cut down by 15kg over the AMG GT S, thanks to carbon-fibre construction, while the reworked suspension helps with handling. Its underbody active aero and a fixed rear wing increase the downforce, which in turn ensures maximum cornering speeds. 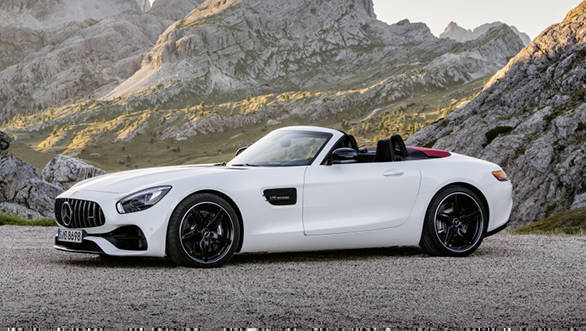 Talking about the Mercedes-AMG GT Roadster, it gets a mild design revision over the previous AMG GT. This can be seen with the similar dimensions. However, since the roadster takes inspiration from the AMG GT R, it has a wider track of 57mm due to the wider tyres. Even the rear width has gone up that has made the designers frame a different fender styling when compared to the previous offering.

Internationally, the GT is the range starter whereas the C is placed between the S and the GT R. The cabin design does look similar to the earlier model. However, this one gets the new Airscarf system which blows a stream of warm air at the back of your neck when the ambient air gets cold.

The AMG GT Roadster continues to be powered by a 4.0-litre bi-turbo direct-injection V8 engine with a peak power output of 476 horses at 6,000rpm and a maximum torque of 630Nm that is produced at just 1,700rpm. The German manufacturer claims a top speed of 302kmph and also states that the GT Roadster can reach 100kmph in 4 seconds. We have already driven the Mercedes-AMG GT Roadster, click here to read the detailed review.

Stay tuned to OVERDRIVE as we bring the launch updates from the venue.