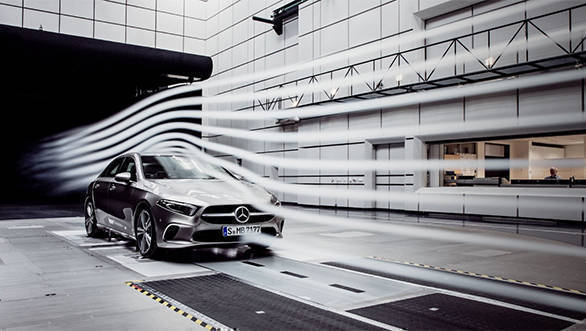 A major advantage for users will be that with lower drag comes better fuel efficiency. Mercedes-Benz optimised the aerodynamics on the A-Class with multiple computation loops, as well as simulations in their wind tunnel in Sindelfingen. The biggest change comes from a small frontal area, which measures 2.19m2. Other aspects including full panel for the underbody, as well as extensive sealing of areas such as the headlamp surrounds, have also played a role.

Mercedes-Benz further tuned the front and rear wheel spoilers to route the air around the wheels at the best possible efficiency. To aid the routing of air, the company also includes a two-part shutter system behind the front diamond grille. The A-Class Sedan has not been confirmed for India yet. The A-Class hatchback had made its debut at the 2017 Geneva Motor Show.