Mercedes started their Indian operations in 1994 and for quite some time shared the 100 acres Pune plant with Tata Motors. In 2012 though, the company opened a new paint shop. MBIL assembles the C-Class, E-Class, ML and GL-Class here. The company also announced they will start S-Class assemblies soon. 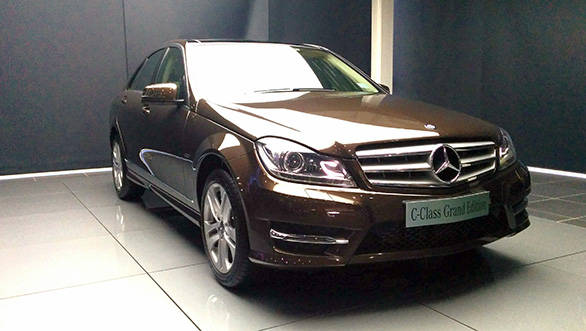 Powering the Mercedes-Benz C-Class Grand Edition are a 170PS/400Nm 2143cc 4-cylinder diesel and 186PS/285Nm petrol engines. Both the engines are fitted with Eco Start stop and are mated to a 7G-tronic autobox.

Mercedes has globally just unveiled the all-new C-Class. While no right-hand drive cars have been showcased at the moment, we expect Mercedes to announce plans of the new C-Class at the expo. The car could come to India only next year though.