Mercedes' onslaught of launches has been keeping our calendars choc-a-bloc. After bringing out a couple of new AMG vehicles and more, the German luxury carmaker is looking to launch its smallest SUV, the GLA in India on September 30. And in a week's time, we will also have the E 350 CDI hitting Indian roads.

The Mercedes GLA will be a competitor for the Q3 and the X1. It's compact and is built on the same platform as the A- and B-Class cars. Its looks,  like the Q3's, command unanimous appeal - they're a far cry than the X1's, which have people either applauding BMW's radical design or expressing outrage for well, the same radical design. While internationally the GLA is available with a 4Matic mode, India will as of now, get only the two-wheel drive version. Ground clearance though, for the Indian roads, has been raised to 183mm. 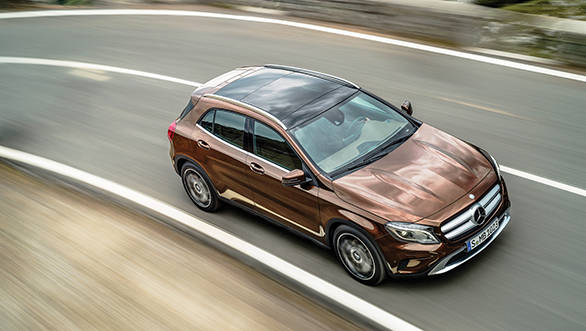 The GLA will come with two engine choices. One is a 1.6-litre turbopetrol which makes 155PS and 250Nm of torque. The second, a diesel is the four cylinder 2.2l motor which produces 135PS and 300Nm. Both the engines come mated to a 7-speed automatic. Mercedes will be bringing in the GLA to India via the CBU route.

More from OVERDRIVE on the Mercedes-Benz GLA: