Mercedes-Benz just unveiled the GLC at the Hugo Boss facility in Metzingen. The stylish SUV is a reflection of the new C-Class and also features the strengths of that sedan. The GLC will be positioned between the GLA and the GLE and is expected to be launched in India in the second-half of 2016. Whether the SUV will be offered as a CBU or a CKD is yet to be seen, but judging from Mercedes-Benz India's strategy it will first come in as a CBU. Expect pricing to go above the Rs 40 lakh mark. 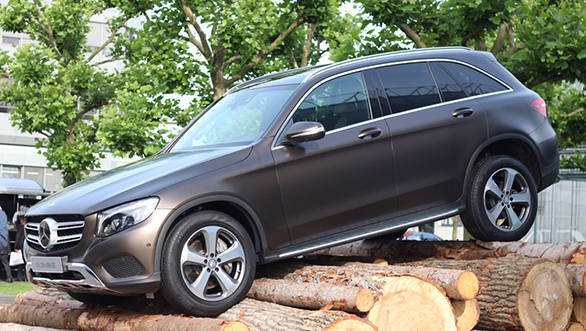 The GLC incorporates a lot of the design cues of the C-Class on which it is based. The design accents on the front face as well as the interiors are an instant reminder of the C-Class. The interiors especially are quite stunning incorporating several elements such as the mirror finish on the centre console, the aluminium-finished buttons and dials and the Burmeister audio system.

Unlike the GLA, the Mercedes-Benz GLC will be offered with its four-wheel drive system also knows as 4MATIC. Under the hood there are a choice of three engines, two diesels and one petrol. There is the 220d and the 250d both of which we expect will be offered in India. The 367 horsepower petrol however may not be an ideal choice though I see little problems with it being offered to Indian consumers as well. All engines are mated to a 9-speed automatic transmission.

Mercedes will also offer the GLC with a plug-in hybrid motor in the GLC 350 e variant with an output of 320 horsepower. Mercedes-Benz claims an efficiency of just 2.6 litres per 100km with this system, and that would make a highly interesting proposition for Indian consumers looking to make a environmentally sensitive statement.

The GLC is sprung on a variable damping suspension system and five drive programmes such as an Eco mode, sport mode etc. each of these driving modes changes engine, transmission and suspension character depending on the surface and driving conditions.

The Mercedes-Benz GLC has a lightweight design saving up to 80 kilos and an aerodynamic efficiency of just 0.31Cd. In addition there are a host of safety and driving assistance systems that will be on offer though what is exactly on offer to India is still far from finalised.

The GLC also gets a unique off-road function that 'rocks' the GLC free if it gets stuck. This feature is already available on Mercedes-Benz trucks and has been incoporated for their passengers cars, first featuring on the GLC.

Mercedes-Benz will also offer in the future a coupe based on the GLC though currently it's only a concept. Future Mercedes-Benz SUVs will also have an all new way of being named. All three letter SUVs will get rid of the suffix Class. Henceforth the GLA will be known as just that, the GLA, the GLC, the GLE which we currently know as the ML-Class and the GLS which is the GL but built on the S-Class platform. At the very top though, the flagship and highly capable off-road SUV, the G-Wagon will be the only one to retain its single alphabet though it will be called the G-Class.