It is already known that MG Motor India, the completely owned subsidiary of SAIC Motor Corp, will be beginning its operations in the country in 2019. In line with its plan, the company recently completed the acquisition of GM's Halol plant. The first product that will roll out from the MG's Halol plant will be launched in the Indian market in 2019. This will be followed by the launch of the next product in the following year. The company has not announced the segment it wants to target with its first launch. However, according to the internet, MG might launch an SUV first. MG's international portfolio consists of the GS, XS SUV, MG3 hatch and MG6 sedan.

"We acquired the Halol plant last week. An agreement has been inked with the Gujarat government and the land transfer and handover have also been completed," MG Motor India president and managing director Rajeev Chaba was quoted. The company has already made an investment of Rs 2,000 crore, part of which has been used for the development and acquisition the Halol plant. The Halol plant will be given a complete makeover to suit the modern technological needs of MG Motor India's country-specific products. We believe, like most other car manufacturers, MG Motor India might use this plant for global exports as well. 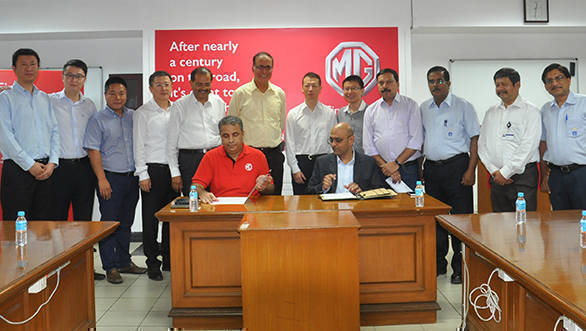 GM India and MG India officials at the plant sign off

MG Motor India has already announced that it will be targeting the premium segments with its vast product portfolio. Even though the company has not let out any information of the particular model from the global portfolio that will make it into India, MG is confident that the large number of platforms from parent company SAIC shall be helpful in developing a India-specific product. MG Motor India will begin operations with an initial production capacity of 80,000 to 85,000 units per annum for the first 4-5 years. This can then be increased to double as and when demands go up, mentioned Chaba.

The brand name MG Motors is not new for India as there are already 500-odd owners of vintage MG cars. In terms of workforce, the company has already hired 70 people and will be further employing more to make it a total of 1,500 in the coming years.