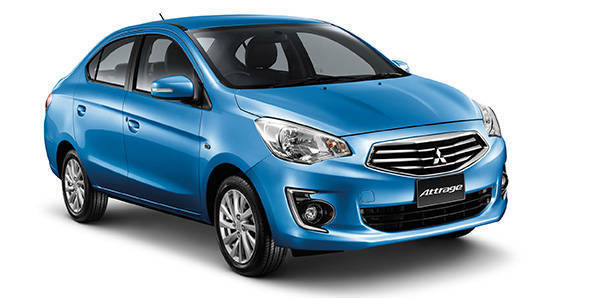 Mitsubishi gave us a teaser of its new global sedan, the Concept G4 at the Shanghai Auto Show a few weeks back. The company which is globally facing the heat due to lacklustre sales figures and an old lineup of vehicles is now looking to reclaim its lost glory. The Concept G4 has given way to the production model called Attrage, barely a month after the former was showcased in Beijing.  Based on the compact Mirage hatchback, the Attrage will launched in Thailand next month and thereafter in other markets.

The Attrage looks much the same as the Concept G4. Infact, we are tempted to say that it looks like a rebadged Nissan Sunny/Renault Scala. And as expected, the production-spec Attrage loses out on the snazzy wheels, headlamps and grill from the Concept G4. Mitsubishi claims that the Attrage with the 1.2-litre MiVEC engine when mated to the 5-speed manual or CVT will deliver around 22kmpl in the Euro cycle. The Japanese company also says that due to the use of the Reinforced Impact Safety Evolution body which makes use of high-tensile steel in large amounts, the Attrage has the lightest body in its class. The drag coefficient is a low 0.29, again claimed to be the best in its class. And so is the turning radius of 4.8 metres.

Since Mitsubishi is keen to call the Attrage as its "next-generation global compact sedan", we expect it to come to India in the near future. However, whether it will follow the Mirage or precede it remains to be seen. Also, as of now, there is no diesel engine confirmed for the Attrage and for the Hindustan Motors-Mitsubishi combo to launch a car in diesel-crazy India without one will be akin to deciding the future of the car before its launch.