Marc Marquez seems to be making it a habit of winning in America. From his first MotoGP win at the Circuit of the Americas, to winning at Laguna Seca (with that much talked about overtaking manoeuvre on Rossi at the Corkscrew), the 20-year old has now also won at Indianapolis. It was a dominant weekend for the Spaniard, with him topping the timing sheets in the practice sessions and also blitzing to pole position in qualifiers. 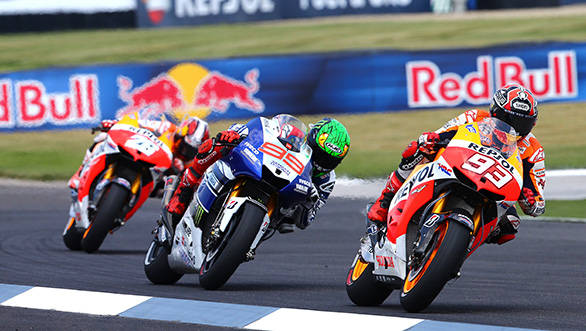 When the five red lights went out at Indianapolis, there was little the Honda rider could do to prevent a hard-charging Jorge Lorenzo from taking over the lead. Marquez's team-mate Dani Pedrosa slotted into second, while Marquez was down in third place. But all through Marquez looked calm - he was biding his time before he'd slot back into race lead and take over the win. Sure enough, Marquez first picked off Pedrosa, and then gunned for Lorenzo. That dispensed with, he set about pulling out ahead of the following two, and sliding his way around the track.

Meanwhile, the man on the move further down the grid was Valentino Rossi. Rossi had started the race ninth, moved up to eighth at race start, and then begun his process of hunting down the motorcycles ahead of him. Eventually, he came upon the battle between Cal Crutchlow and Alvaro Bautista. The duo had been battling for fourth place for a while, and Rossi came through and made it quite clear that fourth place was what he wanted. So he went past the pair of them, first a swooping move past Bautista. While Rossi was trying to catch Crutchlow, though, Bautista kept trying to get past as well. But it wasn't to be that way for too long. Rossi grabbed the opportunity he got, muscled his way past Crutchlow, forcing him wide, and took fourth place.

Up ahead, Dani Pedrosa had managed to get past Lorenzo and crossed the line second behind Marc Marquez. Marquez the Merciless increased his lead in the championship points to 188. His team-mate Pedrosa is now on 167. And Jorge Lorenzo is 35 points adrift with 153.