Movistar Yamaha dominated the podium at the MotoGP in Catalunya on Sunday, June 14. Jorge Lorenzo took his fourth win this season while team-mate Valentino Rossi came in a close second. The run for the title advantage has gotten tighter between the two team-mates as Rossi now has a lead of just one point over Lorenzo. 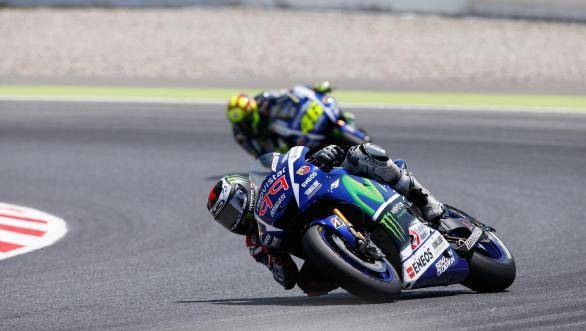 Lorenzo passed Suzuki riders Aleix Espergaro and Maverick Vinales to attain a lead, early on in the race. Marc Marquez pulled through to second place up till lap 3 when his RC213V met with the tarmac  to become one of seven motorcycles that crashed at Catalunya. This is the third time the Repsol Honda rider has fallen this season. Cal Crutchlow too was out of the race early after contact with Aleix Espargaro caused his motorcycle to slide off. Siblings Aleix and Pol met with similar fates later in the race. Ducati's Andrea Dovizioso was gunning for third until he too fell, shortly after Marquez.

The other Repsol Honda rider, Dani Pedrosa, meanwhile grabbed his first podium since his arm pump surgery.
The next round of the 2015 MotoGP world championship will be held in Assen, Netherlands, on June 27.