It was a thrilling 22 laps under the floodlights at Losail. The battle for first place at the season opening MotoGP race at Qatar was for all intents and purposes a four-way battle between Ducati's Andreas Dovizioso and Iannone and the two Yamaha riders Jorge Lorenzo and Valentino Rossi. At the end of the 22-lap race, it was Rossi who took the win ahead of Dovizioso, with Iannone putting the second Ducati GP15 in third place on the podium.

It was a good day for Italian sports fans, what with Ferrari having won the Malaysian GP earlier on that day, with an all-Italian podium in MotoGP following soon after. Not to forget the fact that a resurgent Ducati was also a matter of great national pride. That aside, how did The Doctor go about winning what he described as one of his finest race wins ever? Here's how.... 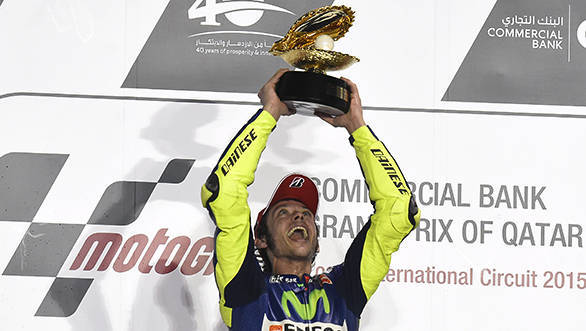 When the lights went out at Qatar, it was pole sitter Dovizioso who got off into the lead of the race. Reigning world champion Marc Marquez had a hard time, running off track and rejoining the pack dead last. Slotting into second behind Dovizioso was Yamaha rider Jorge Lorenzo. Valentino Rossi had his work cut out for him though, having to carve his way through the grid from eighth place.

As the laps wore on, Dovizioso lost the lead of the race to Lorenzo and had to chase down the YZR-M1, with team-mate Iannone in hot pursuit in third. Behind them, Rossi had already managed to make it to fourth on the grid. While Marquez managed to make his way through the grid, even passing Team-mate Dani Pedrosa to take fifth place. But he wasn't able to come anywhere close to catching the lead four. 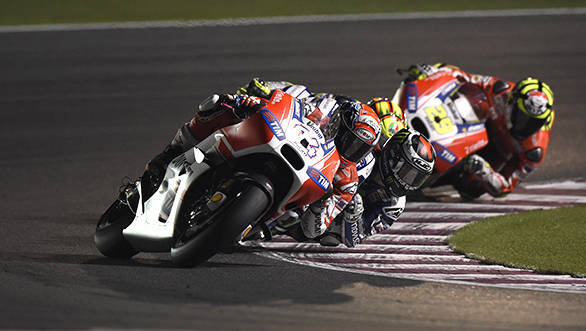 The battle for top spot was on, with Dovizioso and Lorenzo trading places, and Rossi having got the jump on Iannone. On lap 18, Rossi managed to move past Lorenzo, and then he began chasing down Dovi. With two laps to go, he managed to get past the Ducati, but Dovizioso made a move once again that put him in the lead, only to run wide and allow Rossi to take command of the last lap. And it truly was a faultless last lap, as the Doctor didn't put a wheel wrong and took the cheque red flag in style, with the Ducatis second and third. It was Rossi's first win at Qatar since 2010.

Lorenzo settled for fourth place, later complaining he was battling visibility issues with his helmet through the race and was unable to see in the corners, while the highly aggrieved Honda duo finished fifth and sixth. Marquez was visibly unhappy with the result, while Pedrosa stated that he needed to find a medical solution to the arm pump problems he was suffering and that he couldn't continue to race otherwise.