Jorge Lorenzo looked determined to lead from start to finish of the FrenchGP and did exactly that. Starting from pole, a perfect launch meant he took a lead of 0.5s at the end of the very first lap. Consistent and quick lap times helped the Spaniard open up a huge lead over the rest of the pack. Following him was Ducati's Andrea Ianone, who fought hard for second position and passed his teammate Andrea Dovizoso but wasn't ahead for long as he low-sided and crashed out with 22 laps to go. 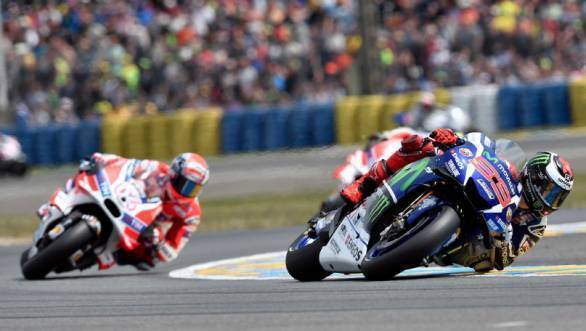 This helped Valentino Rossi and Marc Marquez move up places to third and fourth, respectively. Rossi meanwhile looked quicker and eventually passed both Marquez and Dovizioso to move up into second place. He would later say that his Yamaha had more pace, allowing him to pass the Honda and the Ducati.

The Grand Prix de France got more interesting when both Dovizioso and Marquez crashed out on the same corner, one after the other, despite no contact between the riders. Marquez, however, managed to get back on the Honda and ultimately finished the race in last place. Other significant crashes were those of Cal Crutchlow and Bradley Smith. 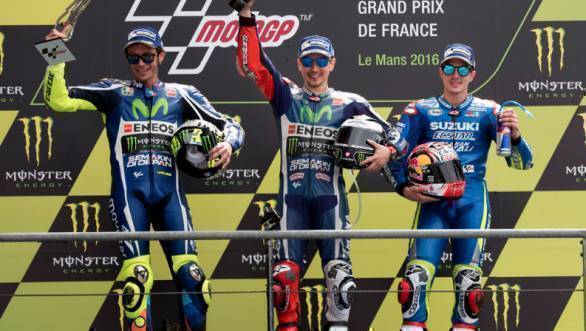 Valentino Rossi and Jorge Lorenzo celebrate their second and first place finishes for Yamaha, while Maverick Vinales celebrates his first ever premier class podium in MotoGP