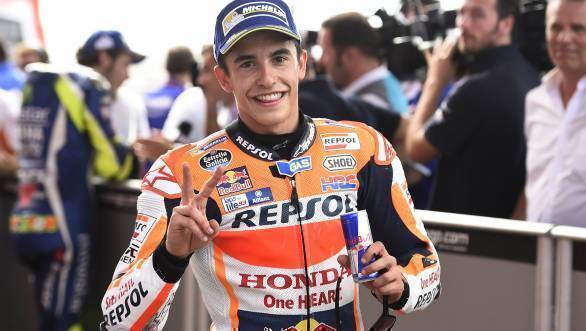 The minute Michelin withdrew both the hard compound rear tyre options after Scott Redding's crash at Argentina, things got very very interesting. More interesting than the rain had promised it would anyway be. And, with the compulsory mid race bike change with riders now on the medium compound rear tyres, and the fact that it was Marc Marquez, Valentino Rossi and Jorge Lorenzo on the front row of the grid, things looked very exciting indeed.

When the red lights went out over the Circuito De Rio Hondo at Argentina, it was Jorge Lorenzo who got off to a good start, but soon began to slip down the order. The man who came out on top, eventually proved to be Andrea Dovizioso on his Ducati, who was being chased down by Rossi and Marquez.

The battle between Rossi and Marquez would prove to be thrilling but short-lived, as the Repsol Honda rider fixed himself onto the tailpipes of the Yamaha, and soon made his way past the M1. Then the pair set about chasing the Ducati of Dovizioso, who they both managed to get past. Which meant that the order up ahead was Marquez, Rossi and Dovizioso.

Then came the series of crashes. Jorge Lorenzo lost the front end of his Yamaha on Turn One, and was forced into retirement. Cal Crutchlow and Aleix Espargaro also crashed at the same corner, although, unlike the reigning world champion, both were able to rejoin the race. Jack Miller too had the misfortune of going down and out of the race entirely.

Meanwhile Andrea Iannone had climbed into fourth, just behind his team-mate, while Suzuki's Maverick Vinales was making steady progress through the order, muscling his way into third place. Ahead of him, the battle raged on between Rossi and Marquez, with Rossi taking the race lead shortly before riders were allowed to come in and swap for their second bikes.

Maybe it was in the pitlane that the race was won. Marc Marquez appeared to fly from one motorcycle to the next, while Valentino Rossi was visibly slower during his bike swap. Then there wasn't much that Rossi could do as Marquez pulled away at the head of the order.

The Ducatis were on the move next. Iannone managed to get past Rossi who ran wide, after which Dovizioso managed to get past both riders to take second. But when the two Ducatis tangled with each other as Iannone made a desperate attempt to challenge for position on the very last corner of the very last lap, both ended up crashing out. Which meant that as Marc Marquez crossed the chequered flag first, Valentino Rossi was gifted second place, while Dani Pedrosa made an unexpected trip to the podium for third place. A terrific fourth place went to Eugene Laverty, while Hector Barbera and Pol Espargaro finished fifth and sixth. Stefan Bradl, Bradley Smith, Tito Rabat and Alvaro Bautista rounded out the top 10.