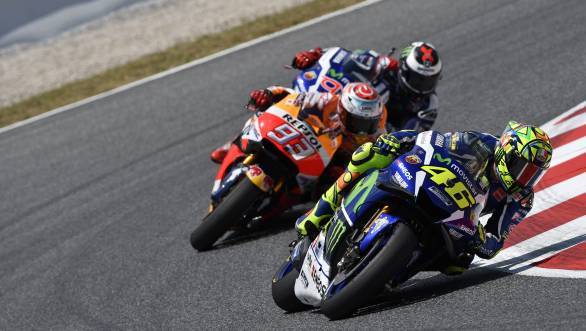 Valentino Rossi took a terrific win at the 2016 CatalanGP, keeping Marc Marquez at bay after a close battle towards the end of the race. It was a challenging race for Rossi to win. While the Italian started fifth on the grid, by the end of the first corner he was down in eighth. From there, however, Rossi set about making his way up the field, moving into the lead on the seventh lap of the race.

Once Rossi was in the lead, having vanquished team-mate Jorge Lorenzo, it was a battle between him and Repsol Honda rider Marquez, who had also managed to move past the championship leader. Unfortunately for Lorenzo, who was slipping down the order, he was taken out of the race when Andrea Iannone made a rather ambitious attempt at passing him on Lap 17. While Iannone looked like he was apologising to Lorenzo after the crash, it was clear that Lorenzo was having none of it as he brushed the Ducati rider off, and shook his head while walking to safety.

Meanwhile, up ahead Marquez was beginning to put pressure on Rossi. He managed to take the lead of the race, only for Rossi to take it back on the penultimate lap. When Marquez ran wide on the circuit's seventh corner, the gap to the leading Yamaha increased. Rossi and Marquez had 0.7 seconds between them on the last lap. There was nothing that Marquez could do to keep up. Rossi won the CatalanGP with Marquez second, while Repsol Honda's Dani Pedrosa finished third.

On a race weekend marred by tragedy, it was something of a relief to see Rossi and Marquez shake hands after the race. The first sign that the hatchet was being buried after the events that transpired at Sepang in 2015.