Marc Marquez took a fine victory at Brno, extending his lead in the 2017 MotoGP championship standings, after a clever race at the Czech track saw him make better strategy calls than his rivals. The Spaniard ended up beating his team-mate Dani Pedrosa to the win, with championship rival, Yamaha's Maverick Vinales, ending the race third. Meanwhile, it proved to be a troubled race for Valentino Rossi, whose strategy saw him flounder, although he ultimately managed to fight back to fourth position. 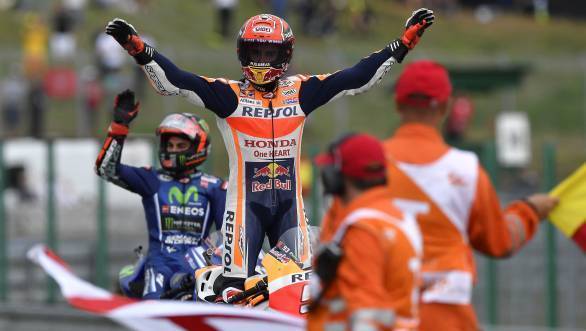 Marc Marquez extended his lead in the 2017 MotoGP championship standings, after victory at Brno

The race at Brno began in the wet, but with the track drying up as early as on the warm-up lap. Marquez, who was on pole, led the race as soon as the lights went out, but was passed by Jorge Lorenzo on the Ducati. While he slipped down the order to tenth, his wet medium front and wet soft rear tyres weren't helping any. He pulled into the pit lane at the end of the second lap. He swapped bikes, and went out on slick tyres. 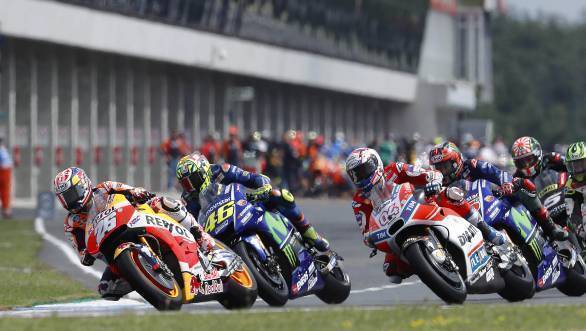 Marc Marquez leads the pack into the first corner at Brno

Meanwhile, Rossi who was now in second place, was chasing after former team-mate Lorenzo, who he soon passed for the lead. But while the pair of riders remained on track, most of the other race-win contenders had already pitted and swapped bikes. While Lorenzo chose to pit at the end of the fourth lap, Rossi stayed out till the end of the fifth lap before pitting - which would prove to be his undoing.

Marquez, with the slicks working well for him, was already slicing his way through the pack, managing to move up to the head of the order, overhauling Johann Zarco for the lead. The fact that Marquez had pitted as early as he had, gave him an advantage - to the tune of 19 seconds, no less. It became clear that victory would be his, and Marquez managed his race pace, comfortably crossing the chequered flag first. 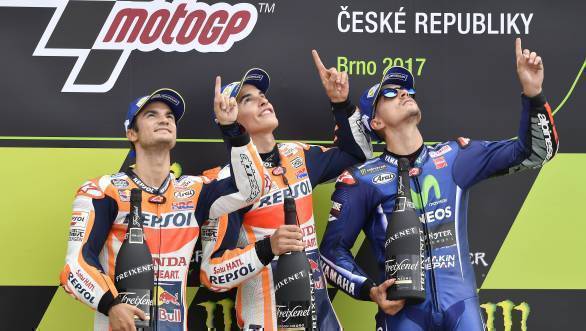 Pedrosa, on the second Repsol Honda, also made steady progress up the order, having managed to move into second place at the end of it all. Behind him, Maverick Vinales moved into the final podium slot, having battled Cal Crutchlow and Danillo Petrucci.

Rossi, meanwhile, had also been hard at work, having carved his way from 13th to ninth and then slowly moving him to fifth place where he had a battle on his hands with Cal Crutchlow. While Crutchlow did try to fight hard for fourth, there was no denying Rossi the slot.

Marquez continues to lead the championship standings, now with 154 points, while Vinales, with 140 points, is second. Andrea Dovizioso, with 133 points, occupies third place in the standings, with Valentino Rossi, with 132 points down in fourth spot.