Marc Marquez will start the Czech Grand Prix at Brno from pole position. The Repsol Honda rider claimed pole at the track with a time of 1min 54.981sec. He was a slim 0.092sec ahead of Yamaha's Valentino Rossi. Also lining up on the front row of the grid is Dani Pedrosa, Marquez's Repsol Honda team-mate. 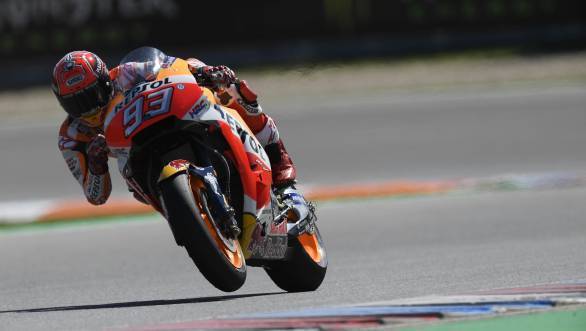 The second row of the grid sees both the Ducatis of Andrea Dovizioso and Jorge Lorenzo lining up fourth and sixth, split by Cal Crutchlow on the LCR Honda. Crutchlow, had suffered a crash at FP3 at Brno, and took part in qualifying, against the advice of doctors. He has since been declared fit to race.

The third row of the grid sees Yamaha's Maverick Vinales line up alongside Danilo Petrucci and Alvaro Bautista in seventh, eighth and ninth position on the grid. Tenth place on the grid is occupied by Johann Zarco who had set the fastest during FP1.

Pole-man Marquez has stated that he feels confident of doing well during the race, and, irrespective of the weather, has felt good all weekend. Marquez currently leads the championship standings with 129 points, with Vinales just five points behind on 124. Dovizio, with 123 points, occupies third spot in the championship standings, with Rossi just behind on 119 points.