In a thrilling last lap battle at the season-opening Qatar GP, Andrea Dovizioso managed to hold off defending champion Marc Marquez for victory in the closing seconds of the race. Much like their famous battle at Losail a year ago, the Ducati and Honda swapped places all through the last lap, with the race being decided at the chequered flag. 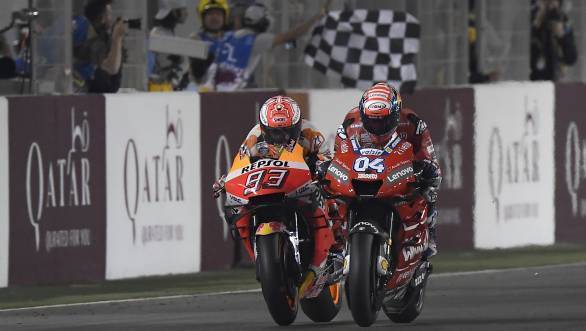 On the second last lap of the race, with Dovi going wide, Marquez managed to make his move to take the lead of the race for the first time. However, at the start of the final lap, Dovi managed to move back into the race lead. Marquez made his move again at Turn 10, only to be overhauled by his Ducati rival on the eleventh corner. At the final corner, Marquez made another bid for victory, moving back into the lead, although very briefly. Dovizioso managed to power through and cross the chequered flag first.

The battle for third place was just as exciting, with LCR Honda's Cal Crutchlow managing to get past Alex Rins at the very last corner, to make it to the podium. This is Crutchlow's first race since he suffered a broken ankle during practice at Phillip Island in October last year. 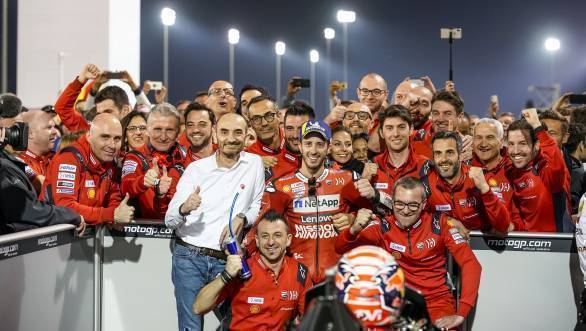 While Rins had to settle for fourth place, Valentino Rossi, who had only managed to qualify in 14th position, carved his way through the pack and finished fifth, half a second off the race leader. Following him home, was Danilo Petrucci on the second Ducati, who had to settle for sixth position after running with the race leaders for much of the race.

Maverick Vinales, who had taken pole for Monster Yamaha, had a terrible start which dropped him down the order. He could do no better than seventh place. Meanwhile Suzuki's Joan Mir ended the race in eighth place, with LCR Honda's Takaaki Nakagami in ninth position. Aprilia's Aleix Espargaro rounded off the top 10.