Speaking about the new partnership, Jorge Lorenzo said, "I am very proud to be tackling the forthcoming seasons with such a prestigious brand as Shark, which has a long history in MotoGP. For me, this represents a most exciting challenge and I am quite sure that, together, we will form a great team. I really hope that I can reward all this confidence they have placed in me with some major successes." 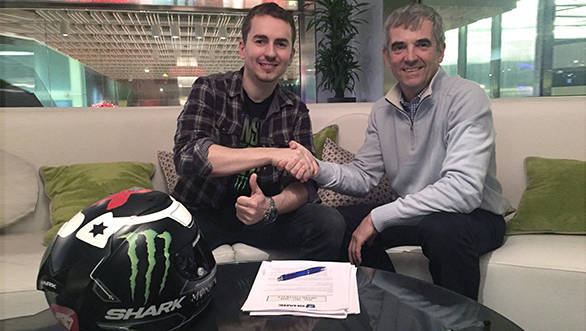 Adding to it Shark's chairman Patrick Francois said "We are very proud of the trust that Jorge Lorenzo has placed in our brand and in our helmets by joining the Shark Racing Team for the forthcoming seasons of MotoGP. Having the chance to work with such a high-level experienced rider is a real opportunity for our brand, as his skills will enable us to push back the technical boundaries of our products. Jorge is aware that thanks to our leading position in the market for motorcycle equipment, we will be applying all our knowhow and expertise to every race in order to support him and fulfil all his expectations. We are certain that the quality of our products will meet with his full satisfaction and that this partnership will lead us all onward to resounding victories during the seasons to come!"

The Race-R PRO is the top of the line helmet in Shark's range and features a shell made up of Carbon-Aramid material. The weight of the helmet is 1,250g. Shark says that the Optics 1 category flat visor offers zero distortion due to its variable thickness. Jorge Lorenzo chose to retain the same helmet design and will begin using it from the first test at Sepang, Malaysia before the 2016 MotoGP season.

The Movistar Yamaha rider had  trouble with his HJC helmet in two separate incidents. At the opening round in Qatar, an internal plastic element in the helmet fell just above his eyebrow, causing him to drop pace drastically. In the second incident, his helmet fogged up in Silverstone during a very wet race thus impeding his vision. The rumour mills were also abuzz with stories that HJC terminated its contract with Lorenzo after his unsportsmanlike behaviour during and after the Valentino Rossi and Marc Marquez debacle in Sepang. HJC, however , responded by tweeting that it did not terminate the contract with Lorenzo and he continues to remain their Number One ambassador. Well that tweet dates back to November 20, 2015 and it's now official that Jorge Lorenzo is no longer with HJC.