Honda has announced Jorge Lorenzo as the replacement for Dani Pedrosa who departs the team after 13 long years. Lorenzo will partner reigning MotoGP champion Marc Marquez at the squad for two years starting 2019. This follows the announcement that Dani Pedrosa would leave the team at the end of the 2018 season. 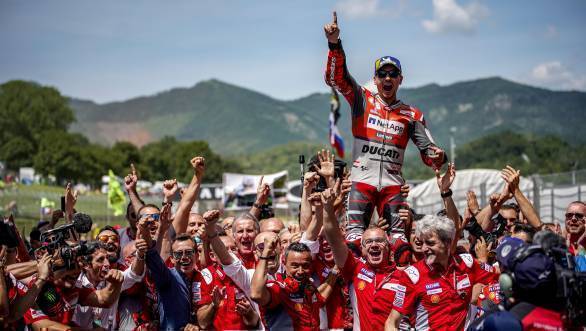 Jorge Lorenzo celebrates his first win for the Ducati team at Mugello.

It was earlier speculated that Lorenzo might consider a spot with the satellite Yamaha team, after it came to light that he was set to leave Ducati. But, the announcement that he will join Repsol Honda has come as something of a surprise.

Lorenzo, who joined the Ducati squad after taking three championship titles with Yamaha, struggled at the team since 2017. When it came to light that his departure from Ducati was inevitable, with an announcement of his, and Ducati's future plans due at Mugello, the Spaniard took a stunning lights to flag victory at that very race. After his race win, Lorenzo announced to the press that he experiencing mixed emotions after the win, as he knew he would be racing with a different motorcycle the following season.

While news on Pedrosa's future is as yet unclear, it is now being speculated that the Spaniard will switch to the Petronas-backed satellite Yamaha squad.