Malaysian rider Hafizh Syahrin has been confirmed as the second rider for the new Tech3 KTM racing team in the 2019 season of MotoGP. There had already been reports that Tech3 had been satisfied with his performance and that he would continue with them next year. For 2019, a big change comes in the form of the Tech3 ending its long-standing alliance with Yamaha and moving to KTM, running factory-spec KTM RC16 race bikes. Syahrin entered MotoGP in 2018 in a stroke of luck, when Tech3 had to rush to find a replacement for Jonas Folger after he had announced that he would sit out this season. Read all about the 2019 MotoGP grid here. 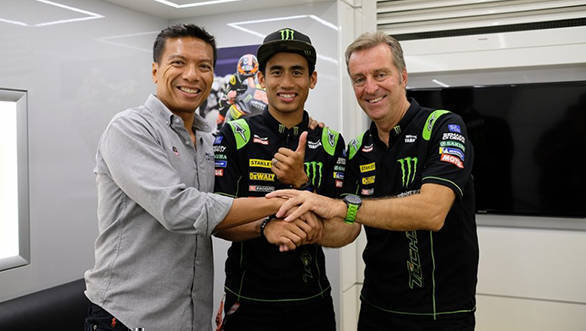 However, it isn't all luck. This season, Syahrin has had a ninth-place finish and is currently jointly stood as top rookie, along with former Moto2 champion Franco Morbidelli.
That says much about the rookie, who is the first Malaysian to race in MotoGP. His teammate Johann Zarco has been more impressive, occupying fifth place in overall standings, and has two-year contract with the Tech3 KTM.

Speaking about his continuation with the Tech3 team, Syahrin said that he was on the verge of tears of joy upon getting the deal. "I will work hard for 2019 and I'll be better prepared, as this deal is not as surprising as this season," he said. Miguel Oliveira, and works team racer Bradley Smith had been other hopefuls for the second spot on the team.