Karl Harris, thrice British Supersport champion and British Superbikes podium regular, died racing at the Isle Of Man TT 2014 after an incident during the Superstock race. Earlier, another TT racer, Bob Price also died. The Isle of Man TT has come to be known as the most dangerous race in the world. It seems to have a couple of fatalities or more every year. And the racing goes on, the racers gush about the TT in a hypnotic mixture of awe and terror at the ferociously fast Mountain course and the spectators come in ever larger droves to see the races that take over the wee Isle every year. 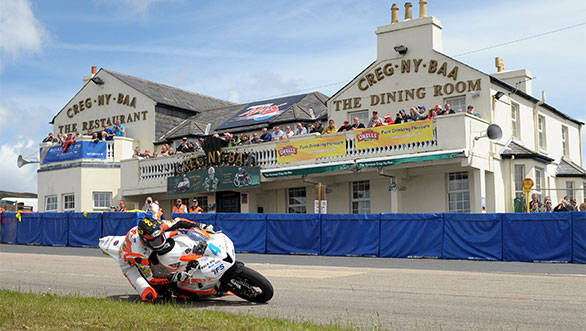 The default reaction to dangerous things nowadays seems to be to ban it. To use an external influence to put an end to it. But as someone wise once pointed out, you can go on banning things in the name of freedom and safety until there's neither freedom left - because all your liberties are now banned - and there's only the safety of knowing you'll die of either old age or boredom.

Death itself is inevitable. We are all going to die at some point - valar morgulis. But I do not think death at the Isle of Man TT, or for that matter, the Dakar is the same as a death in a traffic accident. The men who come to race at the TT or the Dakar do so because they love it and because they wouldn't have it any other way. Gladiators they are not. Gladiators were without exception slaves. The TT racers recognise no master except for their desire to live as hard as they can.

Search the web and you'll see that John McGuinness has a pragmatic approach and acceptance of the risk and that he duly, annually, prepares the house, as it were, in case the ultimate tragedy strikes. It doesn't stop him from going to the TT and racing. And when it eventually does, you can bet that it will be McGuinness' decision rather than a ban enforced by the mayor of Morecambe, the prime minister of the UK or indeed the Queen.

The difference is that these men died doing what they loved more than life itself. They didn't go out feebly shuddering of old age. They went out living life in the grandest, most alive fashion they knew. They came to the Isle of Man TT by choice without exception, knowing what lies ahead and what kind of a cruel muse the mountain course can be.

Death at the TT to be specific and racing in general makes me sad. I'm sure the families of the riders have a terrible time coming to grips with the loss of someone dear, someone so vital and vivid as a TT racer has to be by nature. But as the families have said over and over, they understand that life itself drives these men to the TT and that like death itself, their acceptance of the possibility and racing nevertheless is just as inevitable.

But the question really is at what point does the TT become so politically incorrect that the opinions of the fans and racers and the local economics of the TT doesn't make any difference. I hope it is a long, long time away. Because our world today spends an alarming amount of effort trying to keep us safe from ourselves. Not all of us are brave enough to live life on our terms, accepting the ultimate risk as a part of what the heart tells us is the right thing to do. That freedom is precious and grows more rare every day. The Isle of Man TT is the ultimate expression of that freedom. And I hope it lives for a long, long time.