The fact that the Nurburgring is called the Green Hell doesn't appear to bother Aditya Patel one bit. And why should it? Every time the 24-year-old driver has gone there, he's managed to come away with a good result. Remember he won back there when he raced in the 2011 Volkswagen Scirocco Cup, followed by a third place finish in the event's second race as well. He also had a class win in the 24 Hours of the Nurburgring in 2012. 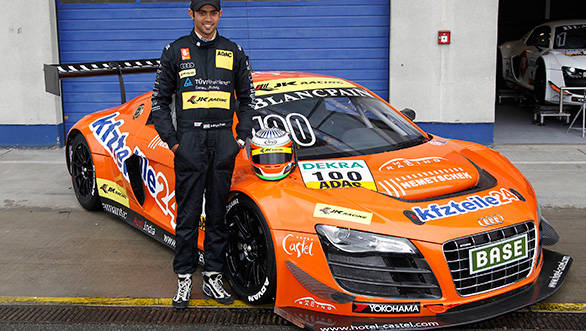 Now, as the ADAC GT Masters Championship heads to the 'Ring this weekend, Patel is rather excited at the prospect of piloting his Audi R8 LMS Ultra at the track. Of course, the race won't be held on the old Nordschleife track, but on the Grand Prix circuit instead and the MS Racing team that he drives for is hoping that the race will go well for them. Why? Because Aditya isn't the only experienced driver in the squad - his team-mate Daniel Dobitsch is also something of a veteran at the circuit, which should work to their advantage.

Of the season so far, the two drivers have managed to gradually improve their pace, finishing as high as sixth place at Race 1 at Sachsenring, their best finish so far this season. A podium at the Nurburgring is not entirely impossible.

"I am happy with the pace and progress so far," said Aditya. "The team and engineers have put in a huge effort to tailor the car for us, and get it to handle how it should," he continued. Aditya also added that every circuit would call for a different setup, but now that the team had a lot of data on hand, they would be able to quickly arrive at a good setup. "Daniel and I also have a perfect understanding, and we are able to share data and understand it well, so that helps in the eventual pace," Patel declared.

Well, good luck at the Nurburgring then, Aditya. We're rooting for you!