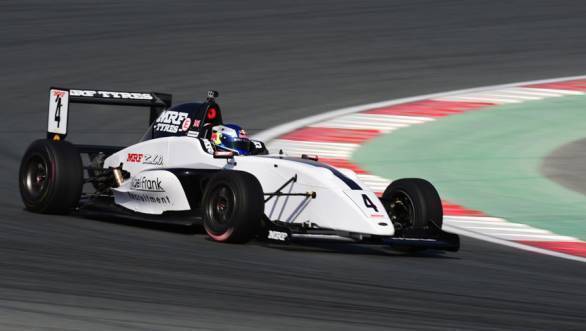 Harrison Newey topped both practice sessons at Round 2 of the MRF Challenge 2016 at the Dubai Autodrome. The British driver was faster than Felipe Drugovich and Juri Vips in FP1. He also finished ahead of Drugovich and Joey Mawson in FP2. In fact Newey was half a second faster than his nearest rivals in both sessions, and also three seconds faster than the practice times from last year's season, which is also an indicator of how much faster the new MRF F2000s are.

Newey's run to the top of the timing sheets wasn't unhindered though. He had competition aplenty in the form of Mawson, who was the first driver to set a competitive time with 20 minutes remaining in the session. Mawson set a time of 2min 01.345sec, which Newey then chipped away at. His fastest time of the session was 1min 59.772sec. Championship leader Mick Schumacher set the sixth fastest time.

It was a similar situation in FP2, with Mawson setting the fastest time initially - 1min 59.883. Newey then began to lower that, going as fast as 1min 57.942sec. Mick Schumacher finished the session fourth.

It was a tough situation for Indian driver Parth Ghorpade, who finished at the back of the grid. Ghorpade has spent the better part of a year out of a racing car, and has taken time to acclimatise to the new MRF F2000.