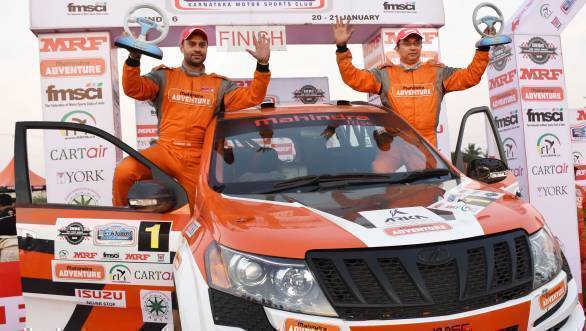 Gill once again proved his skill, winning all the five Special Stages of the event, without ever really being threatened by his competition. He ended the rally with a timing of 55minutes 41.6seconds, which was close to three minutes ahead of his nearest rival. Gill's victory ensured that he amassed a total of 100 points, enough to clinch the title.

Gill, and co-driver Musa Sherif (110 points) have been unbeaten in the MRF INRC 2017 championship, taking victory in every single one of the four rounds that they competed in. This of course, is with the exception of the fourth round of the championship at Chikmagalur, where Gill took part in the APRC, not the INRC, going on to clinch that title as well.

"It was a perfect day, a perfect finish for us," Gill said. "The first couple of stages were slippery but we managed to handle them well; we controlled the rally thereafter," he continued.

Finishing second in the INRC championship, despite rolling into a ditch on SS1, was Dean Mascarenhas, who has also won the INRC 3 title. Dean, navigated by Shruptha Padival, entered the final round of the championship with a slim chance of claiming the title. However, given that they rolled early on in the rally, they could finish no higher than eighth place (third in class), adding only 4 points to their final championship tally.

Defending K-1000 champion Amittrajit Ghosh, who was hovering in the 3rd to 5th position all the way, crashed in the sixth and final stage to take the fifth place overall. While the car was completely totalled, Ghosh and co-driver Ashwin Naik got away with minor injuries.

Fourth-place finisher at the K1000 was Rahul Kanthraj who went on to win the INRC2 championship.

The FMSCI 2WD Cup was won by Chetan Shivram and Rupesh Kholay.

**Co-drivers Nitin Jacob (54) and Mrinmoy Saha (53) took the second and third places in this category.