Tarun Reddy made quite an impact in the MRF FF1600 class last year when he graduated to a slicks and wings racecar having only competed in karting previously. And there's something to be said of the manner in which the 16-year old dominated the first round of the 2014 season of the National Racing Championship at the Madras Motor Sport Track in February this year. Tarun took two wins in as many races moving comfortably into the lead of the championship. And he continued his winning form on track during the second round of the NRC also held at the MMSC. 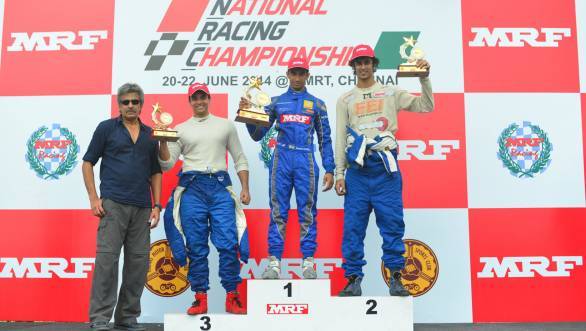 Tarun stamped his authority on the field during qualifying, with a timing of 1min 42.381secs, 0.392 seconds quicker than nearest rival Vikash Anand, with Advait Deodhar a further 0.159 seconds away.

When the five red lights went out during Race 1 of the weekend, Reddy was off into the distance. But his getaway wasn't as smooth and clean as the young driver would have liked, a fact that he probably realised in retrospect. In his run up to the first corner, Reddy swerved to the right, forcing a hard-charging Vikash Anand onto the grass and very nearly into the wall on the main straight. Anand fell back as a result and could do no better than sixth. Tarun meanwhile continued at the head of the order, finishing eight full seconds ahead of nearest rival Advait Deodhar. Lee Keshav, who competed in the Volkswagen Polo Cup last year and continues to do so this year, finished the race in third position. However, a protest was lodged against Reddy after the race. After the stewards examined the evidence, they decided that it was dangerous driving on the part of Reddy and slapped him with a 90 second penalty. This dropped him down to last of the finishers. Advait then moved to the top step of the podium, with Lee Keshav second and Siddharth Trivellore third. Kartik Tharani failed to finish the race when he spun on the exit of the last turn. The other retirements of the 11 car grid were Gautam Ganesh and Sudanand Daniel.

In the second FF1600 race, Reddy started seventh on the grid, with the reverse grid formation handing pole position to Niranjan Todkari. It wasn't a position that Todkari was able to hold onto though, with Siddharth Trivellore passing him and taking the race lead. Todkari said that he had trouble with his gearbox, which meant he was missing gears and thus fell back down the order as the race progressed, eventually finishing seventh. Meanwhile, Reddy moved up the order from seventh to second over the course of the first lap itself. It wasn't too long before he managed to move into the lead of the race. Siddharth then lost second position to Deodhar, which is the order that they finished in at the end of the race. Vikash Anand's race weekend went from bad to worse with engine trouble plaguing him during the course of the second race, finishing sixth.

The third race saw Tarun Reddy lead from lights to flag to take his second win of the day. Finishing second was Advait Deodhar, although he was chased to the finish by Vikash Anand whose car was finally running trouble free.