The new KTM RC390 is set for an early November reveal at EICMA show in Milan, but its fans don't have to wait that long to find out what the new KTM has in store for them. The images and spec details have been leaked from the motorcycle manufacturer's Canadian website, and we have a number of details on the now A2 legal bike. Yes you read it right. Unlike the D390 which needed a restrictor to be A2 legal, the new RC390 at 147kg and 43PS (32KW) peak power just about manages to stay under the 0.2KW/kg power/weight ratio mandatory for a bike to be A2 legal. What that also means as a subtext is that the Duke 390 (naked) will have a better power to weight ratio than the new faired version. 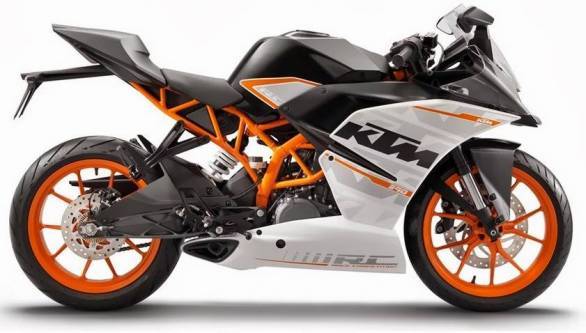 The leaked photo of the new RC390

A2 category is a European specification for medium sized bikes. Missing the A2 category would have meant the new KTM missing out on most of the vital 19-23 years age group. This makes the RC390 the sportiest possible motorcycle that A2 license holders will be able to buy when it goes on sale.

The leaked images, which appeared on visordown.com, show that the RC390 frame, while similar to the D390's steel trellis frame, has been modified. The steering head angle has been increased to 66.5 degrees which results in shorter trail and wheelbase, and increased ground clearance. What that means is sharper steering responses and more importantly still more feel through the handlebars is likely for the rider. This is a critical difference when you're up to speed and cornering the motorcycle. What remains to be seen is how stable the motorcycle is at high speeds and in side-to-side transitions. The D390 can feel a wee bit on the edge on our less than perfect roads in some situations and if the RC390 feels a bit more hairy in the same situation it will be one more difference in the riding feel of the two siblings.

Another significant change from the Duke 390 is the brand new clip on handlebars that enable a sportier and aggressive riding position. This coupled with the new and visually appealing forged aluminium triple clamps - required to accommodate the new steering angle - promise a more focused, compact and sporty setup which sounds right for small and light sportsbike.

The RC390 gets the same single-cylinder, liquid cooled 375cc four-stroke engine as the Duke 390. The brilliant engine comes with twin overhead camshafts, four valves and electronic fuel injection delivers 43PS max power and thanks to the balancer shaft, delivers the highest level of smoothness. The engine is equipped with an electric starter powered by a 12V/6Ah battery. We are currently expecting the gearing to remain more or less the same at the gearbox level as well as at both sprockets for this bike. But final gearing figures, expected early November, will determine how the nature of the performance will be articulated.

Other significant changes include a new 9.5 litre steel fuel tank with 1.5 litre reserve, specifically developed for the RC, brand new twin headlight for the supersport look and integrated blinkers.  It also gets a brand new bodywork, footrests and pedals that help the RC take up fast cornering by allowing a greater leaning angle.

The telescopic fork, 100 per cent digital LCD display with a shift light indicating the best moment for shifting up, the light alloy swing arm, 17in alloys with Metzeler tyres (110mm front, 150mm rear), and ABS are standard.

The RC390 is going to be built at Bajaj's factory in Chakan, near Pune and sold in India as well as exported. The 390 Duke became the first KTM to go on sale on all of the 76 markets that Austrian manufacturer has a presence in and we expect the RC390 to also go on sale in all of these markets. The India launch schedule should be around March-April 2014. Which begs the question, should you wait for the RC390 or go ahead and purchase the 390 Duke..

For those who came in late, Bajaj and KTM are jointly developing lower cost small displacement platforms. The three platforms currently are 125cc, 200cc and 375cc in displacement terms. KTM has already launched the three naked versions all called Duke while the RC-series of which the 390 is first, is to be the faired mini-sportsbike version. We are expecting the RCs to also be three in number, though there will be an RC250 rather than an RC200 from the looks of things. An enduro line is also in the pipeline and expected to start rolling next year.