Honda Motorcycles is looking to expand its range of adventure tourers by planning a half-way model of Honda Africa Twin to cater to a younger audience. The Honda Africa Twin is ideal for someone who wants an adventure bike for two-up travel over long distances. But there are not too many options for someone looking at a more approachable motorcycle in this category. In addition, Honda also revealed the Honda Africa Twin Adventure Sport version for more hardcore riders at EICMA 2017. Honda clearly wants to expand the range. According to Kenji Morita, large project leader for the Africa Twin, "When we speak about adventure, we don't have such a wide line-up. And year, we are thinking of putting a half-way model in to attract younger people. We will develop this bike, but it is not something we are working on right now". And if Honda didn't take long to bring in the CRF1000L here, it should not take long for the smaller Africa Twin to reach India after it is introduced internationally. 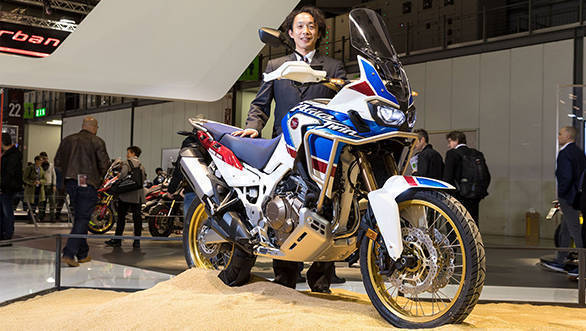 So what engine would this baby Africa Twin house? Well, at the moment, Honda has a good 750cc twin that powers the NC750X. There is also the 800cc motor that powers that Honda VFR800X Crossrunner. With a 750cc to 800cc capacity, the smaller Africa Twin could be ideal for hot mid-size adventure tourer segment that comprises the BMW F800 GS, the Triumph Tiger 800s, as well as the soon to be launched KTM 790 Adventure and Yamaha Tenere 700.

These motors will also allow Honda to retain the DCT as an option on the smaller Africa Twin. With that capacity, Honda may as well be closer to the original XRV650 Africa Twin. With such a motorcycle in its line-up, Honda might also consider upping the capacity to about 1,200cc on the larger Honda Africa Twin to bring it up to spec with the flagship ADV bikes from other manufacturers. Now, with a 2020 deadline for the EURO V emission norms to come into effect, Honda might likely finish showcase the mid-sized Africa Twin at the Tokyo Motor Show in 2019.