Nissan launches the electric version of its NV200 in Europe

Nissan has launched a fully electric version of its Nissan NV200 (Evalia in India) and called it the e-NV200. It has the same drivetrain as the Nissan Leaf, although, it has a new battery pack and higher capacity regenerative braking. It has a range of 170km and a top speed of 112kph. It is available as an LCV (4200 litres of space in the back) or a five-seat passenger car. Charging it takes eight hours with a 16-amp charger and four hours in a 32-amp one. A dedicated charger, CHAdeMO DC 50kW charges the battery to 80% capacity in 30 minutes. 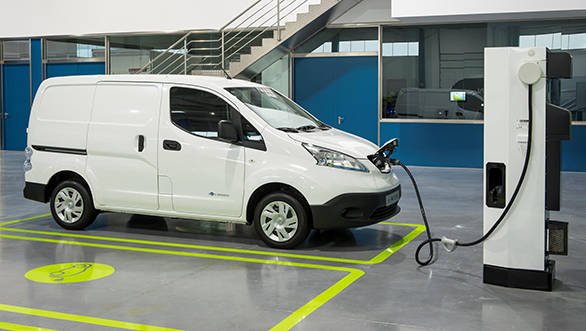 It is currently launched for Europe only. Barcelona has become the first city in Europe to adopt e-NV200 as a part of the taxi fleet. There is also a taxi version planned in the near future. Nissan had recently launched the 1.6 litre turbo-petrol taxis in UK. They are supposed to go into production this December. It is too early to say whether this electric taxi would also go into the taxi fleet of London. There are currently 220 CHAdeMO chargers in UK and Nissan expects fleet operators to fit more at their depots.

Nissan says that the average driving distance of 70 per cent of the vans, in Europe, is 100km. 35 per cent of these never travel more than 120 km in a single day in their entire lives. Apart from a huge effect on the levels of pollution due to zero tailpipe emissions, Nissan claims that the e-NV will be 40 per cent cheaper to service (lesser moving parts) and up to four times cheaper to fuel than the diesel mainly because of the difference in prices.

THE BEST OF THE BEST

Take the finest elements from two award-winning vehicles, add some Nissan know-how and the result is a genuine game-changer

ROLLE, Switzerland (10 June, 2014)  Nissan's zero-emission revolution is entering its next important phase with the launch of e-NV200, the company's second 100 percent electric vehicle.

Launched at a time when air quality in city centres is taking on even greater significance, e-NV200 promises emission-free running thanks to its advanced battery-powered electric motor. As a commercial vehicle the e-NV200 promises to take on an even greater role in reducing emissions and improving air quality as it operates day and night with van and taxi fleets in city centres.

As well as producing no tail-pipe pollution at all  and thus having a hugely positive effect on city centre NOx levels  e-NV200's electric motor produces no noise while its smooth, gear-change-free drivetrain means a less stressed, more relaxed and therefore safer driver.

The Nissan e-NV200 combines the award-winning electric drivetrain from Nissan LEAF, 2011 World Car of the Year, with the best-in-class cargo volume and practicality of the Nissan NV200, 2010 International Van of the Year.

But e-NV200 is far more than a simple conversion of an existing conventionally powered vehicle.

In creating its first pure electric LCV, Nissan has significantly re-engineered and re-styled NV200 for its new role. And although it does use a number of key elements from LEAF and NV200, some 30 percent of its components are unique to e-NV200. There are styling changes, a re-engineered chassis, interior revision, a new battery pack and a higher capacity regenerative braking system.

The result is a range of zero-emission vehicles that are capable of making a significant contribution not only to future mobility but also to the business model of any company using small vans, people movers or taxis.  For as well as being an exciting vehicle to drive, e-NV200 will be cost effective to run and, just as importantly, its sustainability will reflect positively on any operator's business decision.

After an exhaustive testing programme, which included providing globally recognised companies with prototype vehicles to provide feedback in real world usage, e-NV200 is now ready to come to market.

When sales start in June, e-NV200 will be available as a compact but capacious and practical van or as a five-seat passenger vehicle in Combi or more luxurious Evalia versions (Evalia not offered in the UK). The LCV version has a cargo volume of 4.2m3 and can carry two standard Euro pallets, while sliding side doors on both sides and wide opening rear doors  a top hinged single rear door is also available  ensure that loading and unloading is as easy as possible.

Running costs are the number one priority for most fleet operators and the e-NV200 has been developed to help the business equation. Planned maintenance costs are 40 percent lower and without engine oil, belts, gearbox or clutch there are fewer parts to be checked or replaced. Fuel costs are also significantly lower, with diesel costing three or four times as much as electricity for 100 km of driving.

In the coming year there will also be dedicated taxi versions of e-NV200 on the market, a vehicle built to comply with specific, and invariably different, regulations in capital cities. The first European city to adopt e-NV200 as part of its taxi fleet will be the vehicle's home city of Barcelona, Spain.

In fact, e-NV200 is built exclusively in Barcelona for global sale. It will be produced in Spain alongside NV200, using lithium-ion battery cells produced at Nissan's battery plant in Sunderland, UK. The battery packs themselves are made in Barcelona to a unique design for e-NV200.

The Nissan e-NV200 is perfectly suited to a working life in the UK's cities and towns. It has a range a homologated NEDC range of 106 miles  considerably more than the average 100 km daily driving distance of 70 percent of the fleets using compact vans in their businesses. In Europe 35 percent of this category of van never travel more than 120 km in the life of the van.

All of this capability is complemented by a cargo area which is identical to NV200 at 4.2 cubic metres and the payload capacity is even greater than its diesel cousin with up to 770 kg possible.

The battery can be recharged overnight in 8 hours using a domestic 16-amp single-phase 3.3 kW charger  perfect if e-NV200 is not operating around the clock  but this time reduces to just four hours if the optional 6.6kW/32-amp charger is fitted and a suitable supply is used.

Alternatively, a dedicated CHAdeMO DC 50 kW quick charger can recharge the battery to 80 percent capacity in as little as 30 minutes or less if the battery still holds some charge, meaning that e-NV200 can be charged while it is being loaded with goods for another delivery, for example.

"The engineering changes we have made have produced much more than a good electric van it is a fantastic van by any standards. Drivers will want to get behind the wheel of e-NV200 not just because it produces no emissions, but also because it is so good to drive  the ride comfort, the acceleration, the refinement and the ease of use are all far ahead of what they are used to," said Guillaume Carter, senior vice president, Sales and Marketing for Nissan Europe.

"There is change in the air," said Jean-Pierre Diernaz, Director of Electric Vehicles for Nissan Europe. "Europe's cities are introducing ever stringent restrictions on emissions. London already has a congestion charge zone based on emissions while the city's Mayor is preparing for the introduction of an Ultra Low Emission Zone by 2020.

"Paris has this year prevented vehicles driving into its centre in a bid to cut pollution. Diesels, meanwhile, are coming under increased scrutiny for their NOx and particulate emissions.

"As the growth in sales of Nissan LEAF proves, this is the time of the zero-emission vehicle. Nissan e-NV200 takes us into a completely different market segment and will help cement our position as the global leader in electric vehicle technology.

"We believe e-NV200 will genuinely change the make-up of light van and taxi fleets as well as changing the environment in the heart of our cities. All of the 200,000 vans sold per year which never cover more than 100 km a day in their lifetime, could be replaced by e-NV200 without ever needing to stop to refuel during their working day. This simple fact, combined with the low running costs, capabilities and comfort make this a truly game-changing vehicle," added Diernaz.