Notes from the paddock at Silverstone

Silverstone was the first F1 race I went to this season so it was a nice weekend to catch up with paddock folk and watch the cars out on track for the first time. It was interesting for me to look out on track at a few corners on Saturday morning. The guys who have raced in the UK in the Formula Renault / F3 years really looked good in the wet conditions. Drivers like Hamilton, Button, Magnussen, Ricciardo and Raikkonen straight away switched to the wet lines around Silverstone and were able to find grip where people like Gutierrez, Massa and even Grosjean appeared to be struggling.

In mixed conditions, it never ceases to amaze me how the big teams get it wrong. You watch from the outside and it really looks like they are over-complicating their strategies while trying to optimise everything. A team like Marussia that's still run mainly by old school racers look at the weather and say, "Right, we'll send the cars out on intermediates and let them run around getting used to the track until it dries and then we'll put slicks on it." Simple.

Ferrari, Williams, Ricciardo and Lewis all ended up out of position for the race and were lucky that it didn't cost them more. In a session like that with mixed conditions, it's hugely important to just stay out on track. Fuel weight isn't as critical so you're always better off having a bit more fuel in the car and just going around lap after lap to make sure that you're on track when there may be small window of opportunity to improve the lap time. Also by staying out on track, you're giving the drivers more of a chance to feel the grip and the conditions and that in itself is enough to help avoid a disaster. The race itself allowed Lewis to redress the luck balance in the World Championship battle and this inter-Mercedes fight is now going to be very intense, I feel. 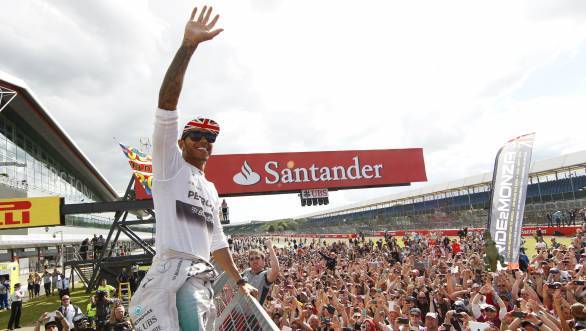 A couple other things I noticed from the weekend. First of all the noise. I really didn't think it was too bad. Yes, it's not brilliant but I didn't think it was as bad as everyone kept telling me earlier this year. I would say though, having a glorious sounding V10 powered car doing a demo before the F1 race doesn't help the current engine's case.

The other overriding feeling I got from the paddock was a real sense of doom and gloom. I'm fortunate to have a lot of friends in the paddock that I've obviously spoken with this year and kept my finger on the pulse. But going to a race meeting where everyone was in the same paddock and just popping in to different motorhomes or bumping into different people really gave me the feeling that it isn't a happy place. Apart from any Mercedes or Williams folk and Daniel Ricciardo, pretty much everyone else had a moan about their team's financial health, internal politics or lack of competitiveness! F1 has always been a tough business but this was the first time in over a decade of going to the paddock that I really felt this overriding feeling of depression. The whole big teams versus smaller teams versus FOM versus FIA battle is really showing on the people who work in the paddock and for their sake, I hope we see some mutually satisfying solutions soon!

The first Formula E tests have been a bit more frustrating than I would have liked. If I had to be honest at this stage, I feel I'm about half a second behind the game. I lost a lot of time on three out of the four tests so far with a battery issue on day 1, an accident where we couldn't get spare suspension parts to fix the car on day 2 and then an unrelated suspension failure on day 3 so I felt like I've been playing a bit of catch up. We only have one more day of running before the first race so we'll see how much progress we can make then. The braking technique and braking stability in these cars is quite different because of all the energy recovery stuff that's going on. I'm missing out on some track time to get my head around the braking phase of the corner  that's really where the half a second is.

The demands on the driver in Formula E really come, not from the speed, but from trying to extract the maximum performance from the car in the most efficient way. Honestly, the mental challenge in terms of working out the energy useage strategy is huge because don't forget we don't have live telemetry so we can't rely on the team for information like in F1.

The energy recovery and dissipation process is extremely complicated with plenty of variables and maps for the drivers to play with. We have had Chetan Maini and his engineers from Mahindra Reva in Bangalore at the last tests and they've taken home a bunch of information to analyse and hopefully their support to the Carlin Motorsport engineers in the UK will help us in this area.

The FanBoost element where the public can vote for three drivers to have more power has been a big discussion point. There have been a few comments from people not liking the FanBoost idea. I do agree it's a bit gimmicky but in reality, it's going to be a benefit but won't necessarily turn the race upside down. It will only be extra power for 5 seconds in the whole race! People often complain that other motorsport needs to get more interactive with the fans so I think this is a small step towards being more interactive and not changing the race completely. With a couple of months to go for the first race, the excitement is really building. The field of drivers is very strong and the laptimes from testing suggest that it's going to be a really competitive championship and a really good show for the fans.