A couple of months ago, I was up early watching a livestream of the chaotic Formula 3 race at Macau when my phone began to buzz with notifications. It happened to be the same weekend that K Rajini was meant to be racing at the Buddh International Circuit. He didn't get to though, since after he qualified on pole someone went and sabotaged his motorcycle. Water in the fuel tank, battery terminal loosened, settings on the dampers mucked up, etc. It was something that made me, and a lot of other people, quite angry. But underneath the anger was sorrow. I'd have felt the same way if this had happened to anyone. Messing with a race machine can have dire consequences, and I'm glad that other than a bruised spirit, Rajini emerged from the affair unscathed. But I think I felt particularly sad that it happened to Rajini. 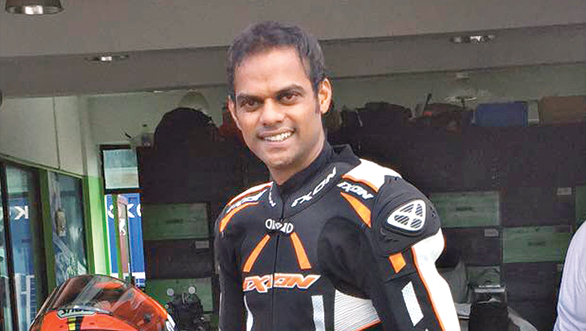 Those of you who have met him, will know that Rajini is an all-round good guy. He's happy to help other racers out, never turning away a young chap who wants a little advice on how to tackle a tricky corner. He's always amicable - I recall him once taking the time out to talk to me after a crash in Qatar despite the fact that he had two broken thumbs. He's also displayed the sort of grit and determination that makes it hard not to like him. Back in 2016, when as reigning Malaysian Superbike Champion, he wasn't able to drum up the requisite sponsorship to go back and defend his title, he just crowdfunded his campaign and carried right on. Over the years, Rajini's repeatedly shrugged off the lack of sponsorship and the feelings of despondency that come with it, and got on with the racing as best as he could.

In the aftermath of the incident at the BIC, everyone called for the culprits to be caught and booked. Some wanted the organisers or sponsors to be held accountable. Others believed that it was the track that was responsible for keeping race machines safe. There was rather a lot of noise about it, with some racers chiming into say that as long as there's been racing there's been sabotage. Which really is too bad. It shouldn't happen. Not to K Rajini. Not to anyone at all. And, while as far as I can tell race machines in the pits are the responsibility of the teams that are running them, it's quite clear that the person responsible for this incident is solely the perpetrator. I've seen race crews work in the same pitbox in the past, never once accidentally swiping another team's wrench or tyre pressure gauge. And certainly never laying a hand on someone else's race machine. Which means the person who carried out this vile act ignored that most important rule that we're all (I hope) taught as kids - that you don't touch what isn't yours. Unfortunately, in my experience, people don't take this very seriously. If they did, there wouldn't be quite as many stolen pens, dog-eared books, dinged commuter vehicles, and distressed women in the world.

In a weak moment after the incident came to light, I felt myself turn cynical. Of course nothing would ever change. Bad seeds would insist on turning up and ruining everything. And the people who fought the good fight, would be the ones who always had obstacles thrown in their paths. But then I realised that cynicism is laziness. And cynicism is acceptance. And cynicism is a way to absolve ourselves of all agency and autonomy, and instead a way to let the wicked in the world carry right on. Which is precisely why we must never ever give into cynicism.

See, there's no way of really knowing who carried out the sabotage - a bitter rival or a general good-for-nothing chump. And there's no way of knowing why - a desperate need for a trophy or a predisposition to mischief-making. And there's no way to ensure that something like this will never happen again - security guards can fall asleep or worse, and cameras can suffer technical glitches or worse. You can attempt to do everything right, but every now and again, if Murphy is to be believed, things that can go wrong will go wrong. So, instead of focussing on what we can't do, let's focus on what we can do.

We can't always teach people to be perfectly good, but we can teach them to be just a little bit better. Yes, we can coach a bunch of youngsters in the art of racecraft, drilling into them perfect racing lines and the right throttle control. But it's no longer enough. It's time to tack on a few lessons in ethics, morals, and sportsmanship too. It's time to teach them that it's not okay to win at all costs. That if you can't win honestly, you can at least lose honourably. It's time to accept that there's no point crying ourselves hoarse about the fact that they haven't already learned this at home or in school. Instead, it's time to effect the change that we want to see. It's up to us to fill in the gaps in their education. To teach them to give everything their all. But to also teach them that no matter how strong the temptation, and how easy the reward, one must never throw a spanner in the works of another human being.

And so as we head into the new year, I wish you the strength to always turn towards hope and courage instead of cynicism and helplessness. And the will to be part of the structure that will bring about the change we hope to see. 2017 might not have been perfectly good, but 2018 certainly can be better. Happy new year!