Of the indefatigable spirit of the Dakar competitors...

For those of you, who like me, fear that you make very little use of your mental capacities, a visit to the Dakar Rally is a must. It will help you discover, as I did when I followed the brave men and women who competed in the 2018 edition of the event, that your fears are entirely accurate. After all, my idea of a hard day at work is drastically different from theirs. And I say this, not to be self-deprecating, but because it is the plain and simple truth. Let's face it, these are people who see and do more before breakfast time, than you and I might do hope to in an entire lifetime. 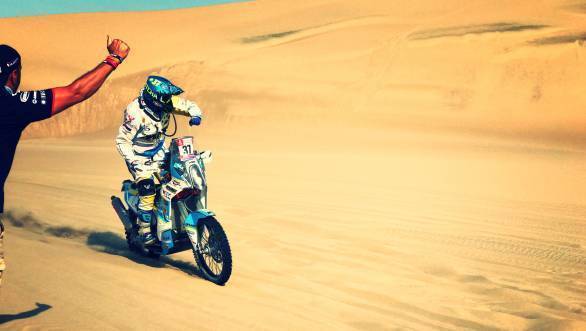 Over the course of the six stages of the 2018 Dakar Rally that I followed live - from the desert dunes and sandy shores of Peru, to the dizzying altitudes of Bolivia - I watched what can only be described as a superhuman effort on the part of all the competitors. Feats of strength and derring-do that truly boggled the mind. I saw massive trucks bogged down in dunes. I saw cars tipped over on their sides. I saw motorcycles take massive tumbles, the rider flying off in one direction and the bike in another. And I saw quads zipping past me in every direction, with the riders looking quite hopelessly lost.

But far more important than that is the fact that I saw the driver, co-pilot and navigator in those trucks make every effort possible to ensure that they got out of the dunes - getting stuck was only temporary. I saw navigators climb out of the cars, summon every ounce of strength in their body to tip the machine back onto four wheels and get going once again - because giving up is never an option. I saw riders limp slowly to their motorcycles, heave them back up on two wheels and ride off into the distance - because no matter what life throws at you, you need to get back up on your own two feet. And I saw those same lost quad riders make it to the bivouac at the end of the day - because getting lost is the universe's way of teaching us a few life lessons. Those of us who truly persevere, will always end up back on the right path. It seemed that there were metaphors everywhere I looked.

And somehow, no matter what had happened over the course of the day, when I saw the competitors back at the bivouac, they managed to have a smile on their weary, dirt-lined faces, taking the time out to laugh and joke on occasion. Some of them certainly looked a little worse for the wear, a limp here or a bruise there. Some of them looked utterly and completely exhausted, like they wished for nothing more than a comfortable bed for the night, but they still soldiered on, smiling. There were roadbooks to be worked on, bikes to be tinkered with, and a tent, or a bunk bed in a van, to look forward to at the end of it all. Yes, there were smiles aplenty at the bivouac, irrespective of the hardships that they were going through. After all every single person who was there, was there by choice. Because they had chosen to take on the mighty Dakar. They were there to see if they were a match for the dunes, the fesh fesh, the rocky inclines, the salt flats, the river crossings, the elements. They were there to see if they could outwit the very forces of nature. Then came the challenge of outwitting their fellow competitors. It demanded every bit of strength that they had, both physically and mentally. It wasn't easy, but it was a little bit like life itself - you face every day in the hope that the next one will be better.

But what happens when the next day isn't better? When you have a hard landing and break a vertebra or shatter your tailbone. Or when you break the bones in your ankle and need to have a rod put into it. Or when old injuries start flaring up because you're putting your body through something it can't handle at that point and it becomes evident that you can no longer carry on. That's when the true spirit of the people who take part in the Dakar shines through. Because you never get the sense that they've been defeated - that they're giving up. There's really just the feeling that they're going to take a little longer than the rest to get to the finish line at the Dakar. Oh, perhaps it won't happen that very year, but it certainly will happen. Finishing the Dakar has merely been deferred. They will be back.

Which is why of the many things that I will remember about my first visit to the Dakar, it is the the incredible courage of the people I saw compete in the rally that stays with me more than anything else. The people that I heard someone else describe as 'crazy', but who I have realised are anything but. These individuals are the very definition of human resilience. They choose to let hopes and dreams guide their life, instead of letting fear govern them. And this is the biggest lesson that the Dakar has taught me - that it is only when you choose hope over fear, that you are truly sane.