When Sarath Kumar pinned the throttle of that old two-stroke motorcycle for the very first time at a racetrack, he found what he'd been looking for his whole life. That one thing that he was really good at. And so, he quite simply never let up. Even when the going got really tough, he never said he was hanging up his helmet and never once tossed his riding boots aside. After all, they were the tools of a trade he'd unwittingly picked up on this accidental journey into a sport and a way of life that he had grown to love and depend on. But years before Sarath took to the racetrack, it had been the turn of another rider. 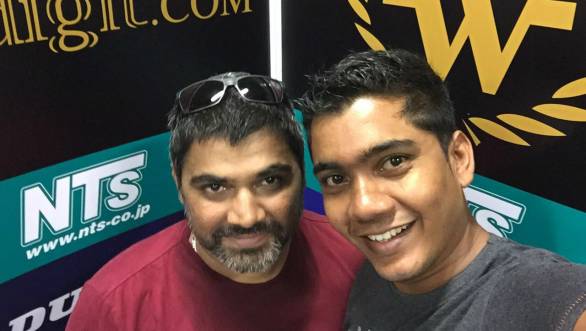 Ramji Govindrajan and Sarath Kumar have taken quite a journey together in the world of motorcycle racing. Here they are all smiles at the ARRC Round at Buriram, Thailand

Ramji Govindrajan had tried his hand at motorsport when he was a teenager. From racing and being as competitive as he could, to getting involved in every aspect of the sport, he did it all. He made presentations for friends in racing and rallying, he approached sponsors and tried to persuade them to at least consider supporting a young rider or driver. And even when he quit for a while, choosing to focus on other aspects of his life, there was, at the back of his mind, this deep desire to someday return to motorcycle racing. To one day field his own team in a world championship series. In his mind's eye he imagined himself a wizened old team manager on the MotoGP grid giving his rider a few words of encouragement before the big race.

Well, history will show that that timeline got a little skewed, but perhaps in a good way. It's a few years later and Sarath and Ramji have been through three races in MotoGP's 125cc class, they've spent some time in the Italian Motor Racing Championship and in the Moto3 CEV Spanish championship. They've seen the ups of national championship titles bagged, international rides obtained and contracts signed. They've also seen the downs - the crashes, international rides disappearing, and rumoured nondisclosure agreements being signed instead. It's been a pitchy ride. And one on which they've learned a whole lot.

For Sarath, the learning has gone beyond just the racing lines and the technical aspects that his sport involves. He's transformed from a young man supporting his racing career by driving a taxi, to a full fledged professional who makes a living from his work behind the 'bars. He's combatted the fear of the unknown. And he's let the grizzly battle scars (psychological and otherwise) that crashes and surgeries have left him with slowly fade.

For Ramji, the growth has been just as great, if not greater. From just dreaming, to doing. He's managed to run a racing team in the national championship, head a riding academy that's churning out a few decent racers and scores of more capable everyday riders, and, he's learned how to get a rider to snag an international ride. What's even more significant is that today he's learned how to keep a rider there. He's learned what to do if Plan A falls apart. And he's figured alternate championships and realistic timelines that can chart out a proper career progression for a young rider.

Which is why, even after a couple of years of dabbling in the smaller leagues, Sarath's now bagged a fully sponsored ride in the 2016 Asia Road Racing Championship's SuperSports 600cc class. If you ask him how he did it, he'll be the first to point out that there's been a Yoda to his Luke Skywalker. Someone who has trained him not only to recognise the force, but to use it well. Someone who's taught him that he needs courage and determination in equal measure if he's to achieve his goals. But also someone who's taught him the incredible power of patience. And, as both student and master will acknowledge, sustaining themselves in the business of motorcycle racing - while also having a keen eye on the prize - has taken all three.

How have they managed to overcome those moments of weakness, though, when it just seemed like it might be easier to focus on a prize that isn't quite so big or shiny? Ramji says it's many things. The first is the knowledge that the landing will be hard, and so it's just easier to keep the momentum and keep right on flying - a gamble that appears to have paid off in a big way today. The second thing that's kept them going is a pact that they made on their very worst day during their times in the MotoGP 125cc class. A pact that was simple and complex all at once. A pact where they said to each other that no matter what happened, they wouldn't give up. They simply wouldn't give up.

There's more to it, though. Ramji is also one of those rare individuals who dreams big with his feet planted firmly on the ground. Ask him what someone needs to succeed in racing, and he's quick to point out that 'money' is an all too simplistic answer. That you can have a million dollars that will do you no good unless you have a system in place that allows you to showcase your talent. Which is why his focus, today, is on creating an ecosystem where riders can learn, race, and then progress through the rungs of the motorsport ladder. And he's also got a knack of looking at silver linings. So the entries in the Honda Ten10 Racing Academy, the calls he gets from parents who want to know how their kids can turn into professional motorcycle racers, and the manufacturers he sees entering the sport today, all make him see a future where the Indian motorcycle racing scene is on par with the rest of the world.

A future where he's most certainly fielding a team in a world championship series once again. After all, this is a dream he's had since he was 17 years old.