When my sister and I were little, we spent a lot of time reading whatever came our way, only occasionally being told by our parents that perhaps we'd better try a particular title a few years hence. We read as much as possible. Children's fiction, slightly more grown up books, tales of the wild west, war stories, and stack after stack of comics. Suffice it to say that our parents ensured that the written word shaped our world view, along the way giving us a colourful set of fictional heroes to idolise.

For a brief while, when we were still little, my mum ran her own bookstore. I remember feigning illness to cut school, and miraculously recovering in time to go to the store with her. Sometimes I'd even get to accompany her to wholesale book dealers to pick out stock for the store, and I'd occasionally nudge her in the direction of books that I wanted to read. But, I guarantee you, if you ask my sister what her most enduring memory of that period of time was, it will be the same as mine. It will be of motorcycle rides in the Bangalore summer. 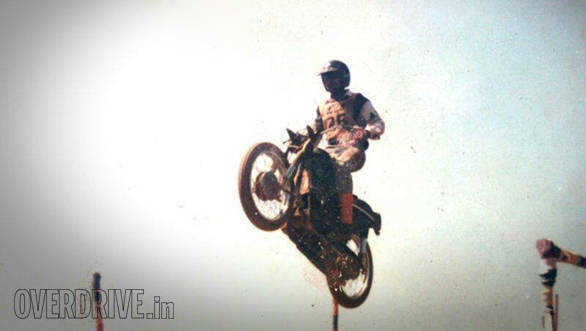 Photo of the writer's uncle, as described in the story

See, there were a couple of months one year, when my Mum's brother was visiting. And on this visit he took to supervising the running of the store, with my sister and I for company, allowing my Mum some free time. This was way before pillion riders wore helmets and motorcyclists themselves wore gear beyond a helmet, and when it was quite common to see families of four on a single motorcycle. So before I proceed, I'll add a caveat - this isn't a recommendation, it's a recollection.

Back then, Raju (which was what everyone in the family called him) would put my sister and I on the back of my Dad's Rajdoot 175, and off we'd go. It was a long journey, but at that time in the early nineties Bangalore was still green and traffic free. On those rides, it almost seemed as if for Raju, the roads transformed into racetracks. He'd tackle corner after corner, little nieces hanging on, pigtails flying in the wind, smiles plastered across our faces. My sister and I would tell our friends that our brilliant uncle (who to amuse us would karate chop stacks of bricks, put on nunchuk shows, and, when the sun went down, spit kerosene out of his mouth and light it on fire) often rode with his knee nearly scraping the tarred roads. No one really believed us. And, back then, amongst all the other fantastic things that he would do, that he would routinely get his knee down on public roads didn't enthrall us. I think my sister, being older, was more aware of how he was defying the laws of physics, but I took it for granted. It was possible, because Raju did it. And, in my eyes, he could do absolutely anything. See, Raju was cool. And he set the bar very, very high. Very few grown ups held our attention the way he did. And even now, well into adulthood ourselves, very few do. I can't imagine my sister or I using the word "cool" to describe too many people. After all, our real-life, in-the-flesh childhood hero is a pretty darned tough act to follow.

And way before we knew anything of motorcycle racing, we knew that our uncle raced. We also knew that he competed in supercross events and rallies, because in various family albums, that are now scattered across the houses of various family members, we'd find photos of him on motorcycles, with competition numbers tacked onto the sides, and onto his riding gear. Yes, he did wear gear when he competed. And if there's one image that comes to mind when I think of Raju, it's a photograph of him on a Rajdoot 175 flying through the air at a motorsport event in Mangalore. I'm fairly certain that it's the same image that flashes into my sister's mind, and into the minds of my parents, aunts, uncles and cousins.

I think of Raju often, especially when June approaches. If a history of wonky tickers that runs in the family hadn't got him, he'd have turned 58 on the 6th of June, 2018.

In this space, I've written about my motorsport heroes quite often. They've included the likes of Michael Schumacher, Niki Lauda and Sir Stirling Moss. People who seemed so far away, and so out of reach, that the thought of catching sight of them, let alone meeting them seemed somewhat ridiculous. But when it happened, it made me feel like motorsport wasn't a completely inaccessible fortress any longer. The irony, however, is that when I was very young, I never realised just how accessible it had been to someone I knew. More and more, I find myself wishing that I'd gotten him to tell me stories of how and why he went racing, and what it made him feel. I'm sure those would have been good tales, too. His often were.

For what it's worth then, I say to you dear reader, celebrate, as much as you can and often as you can, your real-life, easily accessible, flesh and blood heroes. And take advantage of their proximity. Because someday, you might realise as I did, that they're few and far between. And that they don't make 'em quite like they used to.

And to Raju, wherever you are, airborne on a motorcycle no doubt, thank you for the memories. And for setting that bar so high. We miss you.