This column appeared in the September 2015 issue of OVERDRIVE

For our 17th anniversary issue, I wanted to write something special, something that, hopefully, will change your life. So I'm going to talk about tyres. Yes, those black rubber hoops at the bottom of the bike that we all ignore until we either have a puncture or have a big slide and we wonder if they're at the end of their mysterious lives.

The tyre mystery is a real thing. There's a lot of chemistry, engineering and design that goes into tyres and most tyre companies go through life trying to find new ways to make the black donuts more engaging to car drivers and motorcyclists. Serious motorcyclists (and serious car guys) inherently understand the importance of tyres and they pay attention, but the rest do not. But you should.

In my daily life, I almost never have to deal with tyre wear. My job permits me to swap bikes so fast that despite riding an enormous amount every year, I hardly ever have to suffer old tyres. And yet, I've had a realisation that blew my mind. Because all tyres are not created equal. And that makes a world of a difference. 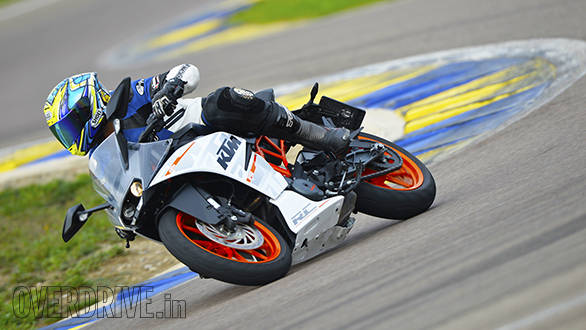 The confidence that comes from knowing that the tyres will grip. . . Deep lean angles become easy and hard braking or acceleration is instantly, readily, relentlessly available

You see, I've been riding my KTM and the Triumph extensively, putting, collectively just under 20,000km over the last 18 months. That means I've been using the excellent Metzeler M5 Interact on the KTM and the even more impressive (and expensive, of course) Pirelli Diablo Rosso tyres on the Triumph for a lion's chunk of my non-testing riding last year. I'm still on my first set of Pirellis but this is my second set of Metzelers.

But here's what I've learnt. With the odd exception, all the motorcycles I tested during this period came with tyres that were less performance oriented than these two. That's not a flaw in MRF, Ceat or TVS Tyres' engineering but a tyre design that aims for something more popular  durability and longevity. A considered response to the role of the motorcycle these tyres are going to be mounted on and the expectations of the customers buying that motorcycle.

To be fair, we have come a long way too. I can say with utmost, unwavering confidence that if I were to make any of the current motorcycles wear the tyres I started out road testing with in mid-2000, there would be a lot of crash protection being tested. Today's tyres last approximately as much as those used to while offering far more grip and confidence. But the point is that the OE tyre on your motorcycles, most likely, was designed for the mass of buyers rather than a class of evolved riders like you. And their riding goals and needs are different from yours, less demanding than yours. So chances are you're missing out because you're using tyres that weren't designed for you.

Lest it sound like a Metzeler/Pirelli festival, I'll just call them performance tyres. Performance tyres fundamentally offer more grip. For acceleration, for braking and for cornering. They do this in many arcane ways but it usually involves a trade off in tyre life. Both sets of my tyres will last about 8,000km and that's if I'm lucky.

But I cannot tell how delicious these kilometres are because of the tyres. I cannot begin to explain the confidence that comes from knowing that the tyres will grip. Deep lean angles become easy and hard braking or acceleration is instantly, readily, relentlessly available. It changes everything. A lot of my friends have been looking to the MRF C1 as a harder-wearing, cheaper alternative for the 390 and I understand that 80 per cent of the performance at 40 per cent of the cost is value for money. But it's not a road I'll be taking. Here's why.

The first change I made to my mindset about bikes when I got my first Yamaha RD350, was expand the list of consumables. Consumables are items that get worn or used up during riding and will eventually require replacing. The usual one is fuel and the next one is lubricants like engine oil. Then there are items like brake pads and even the battery. In the case of two-strokes, pistons, rings and bores were consumable too. But with the performance four-strokes, thankfully, the heart of the engine is no longer a consumable. I added tyres to that list.

My first RD350 came with worn out tyres and I was told that they'd be okay. We'd get new ones once I'd run the engines in. But the bike felt absolutely horrible. It fell into corners abruptly, spun up and braking was an extended nightmare. I think I switched to the MRFs that were considered the best in the market at the time that very evening. And then I fell in love with Fera, my very first performance motorcycle. The arrival of better tyres instantly gave the chassis the ability to do its job, gave the engine and the brakes the grip it needed to poke time and space in the eye like only the RD350 could. Never again would any of my motorcycles suffer the staggeringly large range of ill effects that poor or worn tyres have.

The new tyres on your motorcycle aren't as bad as my RD350's worn initial set. But think about whether they're the grippiest tyres you can afford. And when the time comes, upgrade your tyres. It's the biggest all-round upgrade you can make to your motorcycle. Let me put it this way. Would you buy the cheapest tickets for a suboptimal role in the adventure of your life? That's what motorcycles are. How can you put anything other than the best tyres you can afford on your bike?