"I took a very great deal out of motor racing, but I put a lot back, too. I do feel that I gave it all but my life."

The epigraph to Stirling Moss's All But My Life, a book that was the result of a series of face-to-face conversations with Ken Purdy, has stuck with me from the first time that I read it. I'd found a copy, after considerable time spent searching for it, at a book stall at Brands Hatch in 2011. Moss was a driver that I admired very, very much, after first being introduced to his many accomplishments and escapades via Formula One: The Unseen Archives at a tender young age. And while that book provided me with plenty of facts and anecdotes, it really was reading about Moss in his own words that gave me such an insight into how he approached motorsport and why he did what he did. 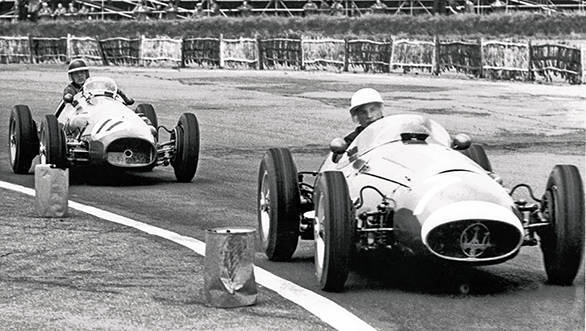 One of the things that struck me the most about Moss' approach to motorsport and to life itself, was the fact that he was a perfectionist. He uses that very word to describe himself in the foreward to the 1963 edition of the book. For Moss, it was the act of racing that was important. Going motor racing, and giving it your all, irrespective of the outcome. It wasn't something so base as winning that mattered to him. Instead it was the racing itself, and racing well that counted. Of course, when he quit the sport, after sustaining considerable injuries in an accident at the Glover Trophy race at Goodwood in 1962, he said that it was because, "... to continue would be too frustrating to bear." He said that he would not have been able to live with the fact that he would no longer be able to deliver the sort of performances that he had in the past begun to consider as standard. That he used the word 'performances' and not 'results' was something that I found interesting. After all, it reiterated his philosophy of racing well, and performing at his very best, irrespective of whether or not he accumulated silverware. It seemed, to me, a very fine way to live.

Approximately two years after I got my hands on the copy of All But My Life, I had a chance to meet Moss and have a conversation with him about his racing memories. He'd told me back then, of his approach to racing, that "You go as close as you can to fear." After all, he was a driver who had famously declared that he'd much rather lose a race going as fast as he could, than win a race going slow. "To drive a car fast is exhilarating. You must never frighten yourself, but you're very close to it," he'd said. And it was this balancing act, this calculated risk, that made him the sort of racing driver that he was. "People say I had a death wish," Moss had chuckled, saying that the truth was something else entirely. "I love life!" he'd happily declared, smiling broadly, eyes twinkling, emphatically thumping his carbon fibre walking stick on the ground to punctuate his statement. Moss might have had the face of an 84-year old back then, but his spirit, that was something else entirely. It seemed like he'd found and sipped from the fountain of youth. There was something infectious about the energy he exuded.

Over the course of our conversation, though, Moss also spoke of how "If it's easy, there's no sense of success." Which is also why giving it his all was so important. Performing at your best even when you were up against the very best. It was the added challenge that led to satisfaction upon a job done well.

There's a mix of words from his book (I highly recommend that you read it) and words from our conversation that seem to pop into my head on a rather regular basis. And, as far as I'm concerned, if philosophical words will insist on popping into my thoughts on a regular basis, they might as well be words from the likes of Sir Stirling Moss. Someone who has seen a bit of the world, accomplished a fair amount, learned lessons along the way, and simply hasn't let a few injuries and the harsh realities of life get in the way of how he chooses to live. And he's managed to do it all while being as frank as he possibly could be. Remember the infamous Moss wave that was performed every single time he overtook another car? "Every driver, every driver I ever passed, I thanked him, or shook my fist at him. One or the other. Either he was being decent or he was being a b*****d and he'd know," he'd said.

This September, as OVERDRIVE turns 19, Sir Stirling Moss turns 88. Happy birthday, Mr Motor Racing. Many thanks for sharing with us your indomitable spirit and enthusiasm for the sport that we all love so much, and for life itself. And along with it for teaching us more than just a few lessons.