Nothing quite matches the feeling of getting a book, that you've been long looking forward to reading, in the post. Or, for that matter, stumbling upon such a book at a bookstore, possibly when you least expect to find it. After all, it's a little victory in itself. An experience made all the more pleasant, and all the more rewarding, if the book in question is out of print and hard to find. But there's a certain extra pleasure if the book arrives in the mail, because ripping into the packaging and then carefully extracting the book, even if you've bought it for yourself, is rather like opening a present. And who doesn't like a good present? It's this very feeling that I had recently, when I was presented with a big fat envelope by my friendly neighbourhood mailman, knowing full well that there was a book just within it waiting for me. I carefully tore open the flap, and after a little bit of a battle with a piece of protective bubble wrap, finally managed to uncover a copy of Juan Manuel Fangio's My Racing Life. It was a book that I'd been in search of for a while now, and getting my hands on a copy hadn't been easy. But there it was at long last, ensconced in its immaculate dust jacket, just waiting to be read. 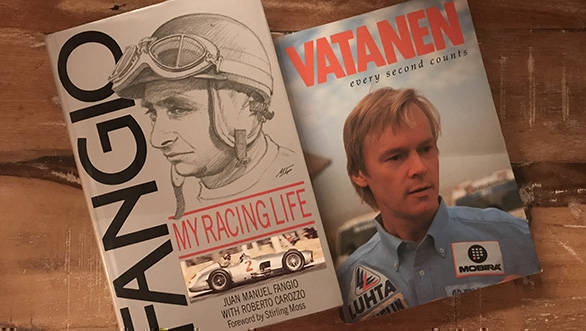 One of the reasons that I was so keen on reading My Racing Life is because Fangio was actively involved in the process of writing the book. It wasn't a book that had been ghost-written. Instead the journalist Roberto Carozzo had been allowed, after proving that he had already done sufficient research on the matter (and proving that he was a meticulous and punctilious sort of chap), into Fangio's life. He gained access to the man himself and his extensive archives and journals, and was able to put together this particular volume. He wasn't simply Fangio's mouthpiece, putting down on paper whatever El Maestro asked him to. Instead when there was a discrepancy between Carozzo's own research and Fangio's account of events, there were arguments and rewrites, all of which the author owns up to, and details in his introduction to the book. But what really sold me on My Racing Life, was one simple sentence that Fangio wrote in the preface: "I have reached that stage in life at which only the truth must be written."

Fangio, is widely recognised as one of the greatest racecar drivers of all time. Not only because of his skill behind the wheel of a racecar, but also because of the moral code that he lived by. His behaviour, according to some of his greatest rivals, like Sir Stirling Moss, was judged to be exemplary. And en route his 24 Formula 1 race wins, and his five F1 drivers' championship titles, Fangio is said to have conducted himself in a thoroughly gentlemanly manner. Which is also why, even as I find myself thumbing through this tome, working my way through page after page of his story, I find it easy to believe the claim he made in the preface.

As I type this out, the last bit of writing that I have to do for OVERDRIVE's 21st anniversary issue, it occurs to me that everything that I've done for this particular edition of the magazine has been bookended by books. My work for the anniversary issue began with me ripping into another package, and extracting another book from its depths. That time it was Ari Vatenen: Every Second Counts co-written by Finnish journalist Vesa Väisänen. The book was integral to my research on Vatanen for the interview-feature that you'll find elsewhere in the issue. What struck me while reading Every Second Counts, was just how unafraid of telling the truth Vatanen was, irrespective of how it made him sound. He recounts making his navigator cry during the Dakar after having been more than a little harsh with him. He tells the story of just how demanding and how diva-like rally drivers could be, while their navigators would have to suffer, more often than not, in silence. And he also narrates in great detail the story of how he drove people around him to despair when he insisted on believing that he was dying of a disease that he did not have. It's a book that is stark in its honesty, and makes for an uncomfortable read at times.

Which brings me to this. I've been thinking rather a lot about truth. Given the times that we live in, it's hard not to. And I've had to come face to face with the fact that the truth often makes people uncomfortable. Even when the act of telling the truth is just that - the act of telling the truth. We live in a time when people seem to bandy about words like "narrative" and "agenda" with very little understanding of why they're using them. A time when statements of fact incur wrath. And a time when calling a spade a spade is considered taboo. And I've spent a lot of time wondering why this is the case. And I seem to circle back to the same answer - the truth is often uncomfortable. And this very answer leads me to yet another question - what good are any of us if we are shrouded in half-truths?

I know this is an uncomfortable question for every single one of us. But it's one that we must all examine, even though it forces us to come face to face with versions of ourselves that we're not entirely happy with. Or perhaps especially because it forces us to come face to face with a reflection in the mirror that we wish wasn't quite the way it was. It's a painful exercise in self-examination, and one that leads to two further questions: Is it that our truth is terrible? Or is it the act of telling ourselves the truth that is terrible? The answers, though difficult to face, will be liberating.

This column first appeared in the September 2019 issue of OVERDRIVE.