How to tame a motorcycle

I have now been riding and writing about motorcycles for about 13-14 years, and most of that time has been spent evaluating and recommending motorcycles to people. But something has happened that partly validates some thoughts on the subject I've had so far. And that something also breaks a perception that I have come up against before and not really fully subscribed to.

I have always held that motorcycles, specifically, were more than the sum of their chassis, engine and design. That supreme refinement, extraordinary chassis ability or brilliant power were extremely welcome but not necessarily the ingredients that lead to the perfect motorcycle. The beauty of the motorcycle is that every one of them is imperfect.

You might perceive this at the basest level as the obvious thing. That motorcycles, unlike cars, cannot even stand on their own two wheels without help from a rider. But I'm pointing to an imperfection that goes far deeper and is far less tangible.

You see, when I was given the Moto3 motorcycle to ride by the gracious chaps in Mahindra Racing, I was a ball of fear, nerves and worry. I'm usually not too worried about hurting myself  that I've reconciled with as a possible outcome every time I swing a leg over the saddle.

But crashing someone else's motorcycle has always been my personal nightmare. It is something I'd like never to come up against. Perhaps the only exception is the road test bike which by its very nature needs to be explored fully, and sometimes the limits of traction, as a direct extrapolation, must get crossed. The laws of physics are inflexible, I've found. Of course, this neither means I never fall off someone's own machine nor it suggests I continually crash test bikes. All this is mental fearithmetic.

So in the four laps I was given, the racebike proceeded to dig out of my being every insecurity, every small riding flaw that I thought I'd worked out of my system. It dismantled my confidence so thoroughly that in the end I was so slow that I'm convinced that if I'd taken the Mahindra Duro pit scooter out on the same lap, I'd clock a faster lap. 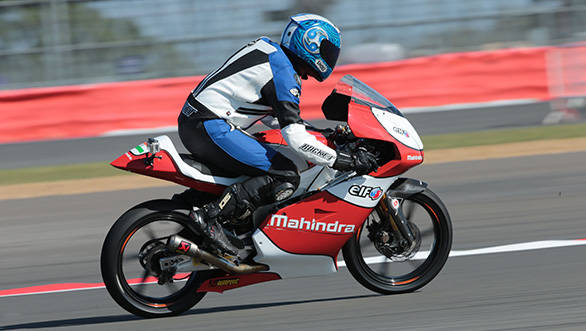 Now this is properly ponder-worthy. How is it that I rode what has to be among the world's top single-cylinder 250cc four-stroke racing motorcycles so badly?

Welcome to the world of imperfect motorcycles. I think the motorcycle needed me to bring something to the table that I utterly, completely failed to. To give you a more obvious example, Lorenzo and Rossi ride roughly identical motorcycles to dramatically different results. You could argue that the difference in their skills isn't all that much. But Rossi at the moment is unable to deliver the bits needed to turn his imperfect M1 into a picture of perfection while Lorenzo is. I'm now convinced that the rider is an integral part of the package and certain machines achieve perfection with certain riders and others require different riders. I've no real way of defining what the difference is, of course. It would be a composite of skill, temperament, nature, preferences and lots more.

Sometimes it is just a matter of time. Given enough time, I'd be a lot happier and faster on the MGP3O. Would I achieve perfection? No. I'm not Miguel Oliveira or Efren Vazquez. But I'd come a hell of a lot closer for sure. The time would be spent getting over the sudden flood of unfamiliarity. I'd get used to the reversed gearbox, the quickshifter, the slick tyres, the circuit layout and so on and so forth. I'd take the time to get familiar enough for the riding brain to reassert itself over the instinctive brain. That latter is a riding killer. It causes more problems than it solves and in fact, is one of most critical lessons at the TWO School by Indimotard and OVERDRIVE.

To circle back to where I started, the perception that just got reinforced is that every rider completes the motorcycle s/he rides. And that is a personal, emotional connection that no one outside can determine, quantify, predict or define. No one but you. This is why people don't only buy the winners of a comparison test. This is why for everyone super thrilled on their near-perfect Honda, there are pockets of riders who ride significantly more imperfect motorcycles and appear to derive even greater enjoyment. This is the reason why the non-Bulleteer will never fully grasp what the fascination with this 50-year-old British single really is.

The other thing that just became clearer is something I've believed from day one. Motorcycles are complicated and defined by their subjective appeal rather than objective results. A tester might call a particular product sick. But its need for constant attention and repair might just be the attribute a particular rider is looking for in his mental image of the perfect motorcycle. I've always thought, as an extension, that motorcycle tests are a lot more personal and general guides rather than strong directives as in case of cars.

Which means that the motorcycle that is number two in the test is still a very valid purchase for someone with the right mindset. Which also means, and this is the point really, that unlike, say, a car buyer, you make your own motorcycle. So read my words, read the words of others but make up your own mind. No one can really tell you what the right bike for you is.

You have to find that out for yourself. Don't worry about the trial and error process that this implies. This is a tremendously fun journey and every step is more enjoyable than the last one.