Can anything beat a well-timed Amul Topical? I think not!

See, I've spent the better portion of the day, browsing through the brand's archives. It's allowed me a quick recap of several newsworthy moments over the last few decades. Complete with the brand's characteristic tongue-in-cheek take on many a matter. Witty writing, lovely illustrations, and the world as seen through the lens of a somewhat greasy (because the hand holding the instrument has been freshly extracted from a slab of Amul Butter) magnifying glass. 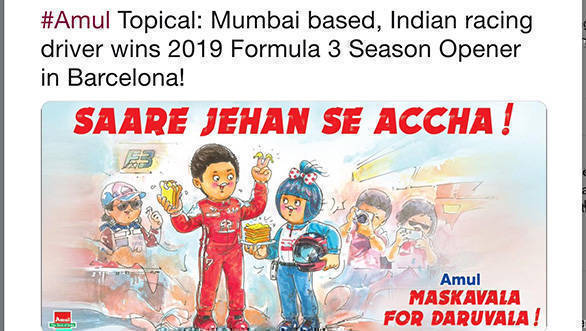 For readers from other parts of the world, here's a quick primer. Amul is an Indian dairy company, that has, since 1966, issued a series of "topical ads" featuring their mascot - the 'Utterly Butterly' Amul girl - in various situations. They've talked politics - the sterlisation drive during the Emergency in India, political unrest in Libya, and, more recently, the US-China trade war. They've, quite naturally, covered plenty of controversial moments in the world of cricket. And they've had ads featuring fashion faux pas, celebrity weddings, deaths of beloved musicians, and advancements in space exploration. But it's their most recent ad that is likely to be of interest to the readers of this magazine. It's a topical with a motorsport twist!

Soon after Indian racer, Jehan Daruvala, won the second race of the FIA Formula 3 season-opener at Barcelona, Amul released an ad. In it, a caricature version of Jehan is seen standing with the Amul Girl. He appears to be holding a sandwich, slathered with butter, which he's likely taken from the plateful that she holds out in front of him. He's smiling. The fingers of his other hand, that seem to have dollops of butter on them, are fashioned into the victory symbol. The caption says "Saare Jehan Se Accha", a play on "Saare Jahan Se Accha". It's as clever as it gets. 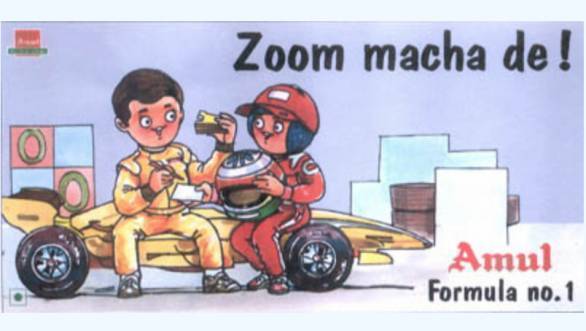 A topical from 2005, after Narain Karthikeyan made his Formula 1 debut at Melbourne, Australia

Of course, this isn't the first time that there's been a motorsport topical. Back in 2005, there was an ad that featured a caricature of Narain Karthikeyan, sitting on the yellow Jordan F1 car, at his Formula 1 Grand Prix debut in Melbourne, Australia. He's seen signing an autograph for the Amul Girl, while chomping away on a sandwich. It was a few years later before the world of racing featured in the brand's topicals once again. In October 2011, there was a small sketch to commemorate the first Indian GP, and later the same month was another sketch in celebration of the fact that the brand was sponsoring the Sauber F1 team. A year later, when Lewis Hamilton took to the streets of Mumbai for a demo run in a McLaren, there was another drawing. Early in 2014, a topical followed Michael Schumacher's near-fatal skiing accident. It wished the seven-time Formula 1 world champion a speedy recovery. And another, six months later, celebrated the fact that he was finally out of a coma and on the road to recovery. If there have been any other motorsport topicals, they're not in the archives online. I know, because I looked very thoroughly. In the name of research, of course. 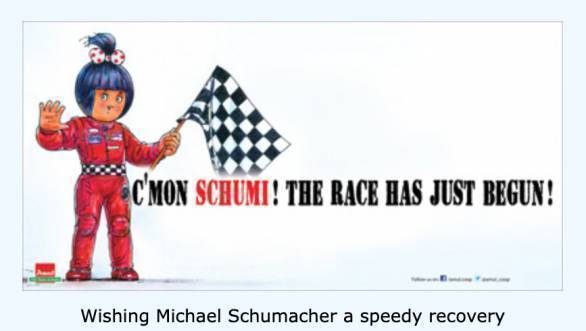 A topical from early 2014, wishing Michael Schumacher a speedy recovery after his skiing accident

But the ad that features Jehan, is special. Because these campaigns usually offer us the best of current events and popular culture. However, in featuring a young Indian racer who is making a mark abroad, they've made an attempt to take something niche and offer it to an audience that's otherwise accustomed to the mainstream. It's a much-needed public acknowledgement that motorsport exists beyond Formula 1. And, they've possibly introduced Jehan Daruvala's name to several Indians who likely hadn't heard of him before. And for this, I doff my hat to Rahul daCunha and his consistently clever creative team.

On the off chance that you're one of those people who hasn't already heard of Daruvala, let me quickly add that this is hardly his first or most significant achievement in international motorsport. Daruvala's FIA F3 European wins at Norisring in 2017 and Spa in 2018 were hard fought and well-deserved. And, he's also got the distinction of being the first-ever Asian to win the British KF3 Championship back in 2013, after which he finished third in the closely contested CIK FIA World Karting Championship the following year. I'm happy to say that OVERDRIVE was one of the very first to acknowledge Jehan's achievements, and he won our Motorsport Award back in 2013 and 2017.

At any rate, the win at Barcelona seems a popular one, and we aren't complaining.

After managing to get off to a good start in the 2019 season, Jehan has said that he is hoping for a top-three finish in the FIA F3 championship this year. All a part of his journey towards securing a Formula 1 cockpit at some point. A dream that he's harboured for as long as he can remember.

See, long before Jehan was racing single seaters abroad, and long before he was competing in go-karts, he was a school-going 10-year-old who begged his parents to let him attend a karting workshop organised by multiple national champion Rayomand Banajee in Mumbai. They were reluctant, seeing as he had an English exam the day after the workshop. They finally caved when a very earnest young Jehan said to them, "But it's a question of my whole career!"

A career that he has taken very, very seriously since that very day. A career that we've watched grow over the years. And a career that we're lucky enough to see being recognised more and more. It's an utter delight! 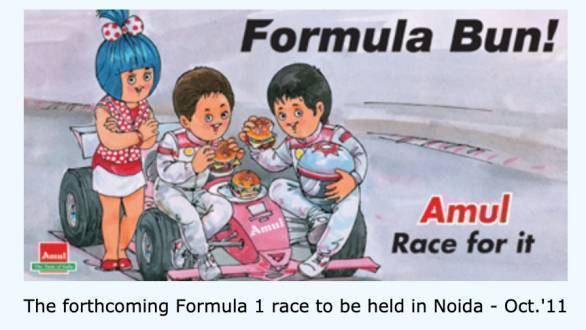 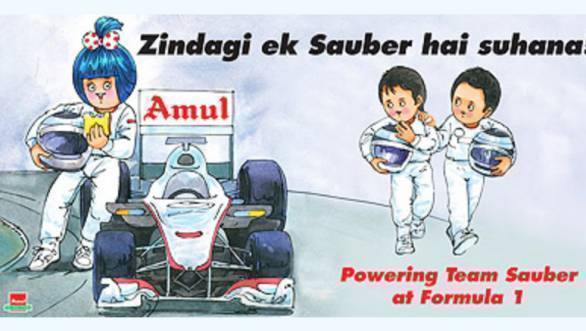 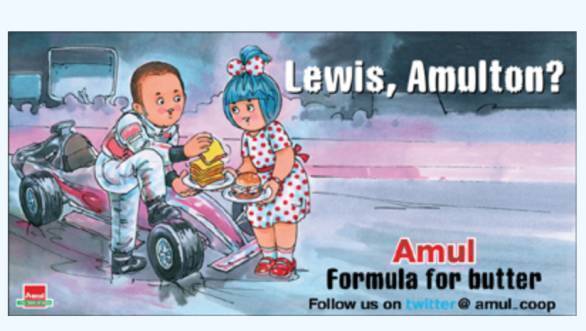 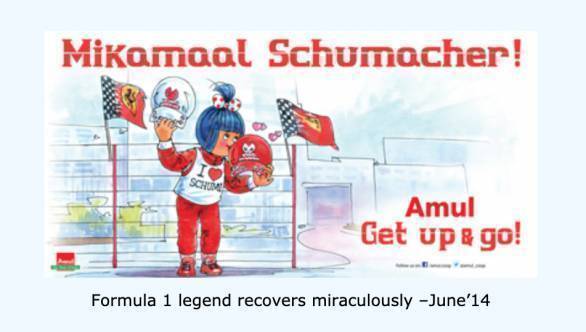