The presentation at the launch of the 390 Duke included one slide that listed the specifications of the new KTM versus all the various Royal Enfields. Many thought that this was odd given that Royal Enfields are so well-defined as a nostalgic brand that there's almost no competition to them. People buying Enfields do not think of other brands and other brand prospects don't consider Enfields either. As usual, the reality is far greyer. 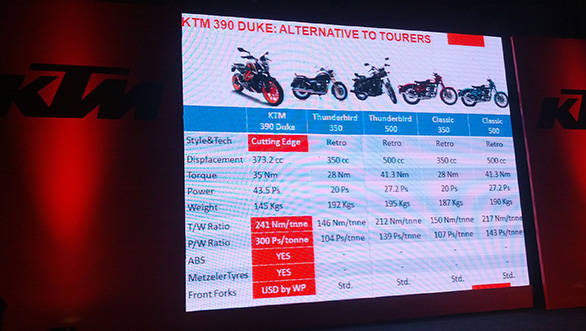 This slide was presented during the 390 Duke's launch press conference

The RD350 enthusiasts and the Enfield enthusiasts are both vocal communities in the Indian motorcycle internet space. But in both social groups there are two kinds of people.

There are, of course, the true loyalists. These people genuinely enjoy their associations with the brand at a profoundly personal level. They may be realistic enough to sense and accept, even celebrate, what the outside world might call flaws or problems. To them, the maintenance needs of their bikes, their spotty reliability or reputation for having almost no geniune or reasonably priced spares on the market and so forth aren't barriers to ownership or love. These are parts of the relationship that require immense amounts of time and effort to overcome and make the relationship that much more intimate.

But there is also the other kind of social group member. The one's who are currently in the cult but aren't as hardcore as the true loyalists. I am not saying these people are traitors or referring to them in any degrading sense. They aren't opportunistic, or traitors to the cause.

They are simply people who like something specific (for instance power) about motorcycles and are currently associating with a particular group because that particular motorcycle or brand offers them that specific thing. When something better comes along, they will move on. If the RD350 or the Enfield has left a deep enough impression, they'll add the new motorcycle to their garage. If not, they'll replace the old one with the new thing.

To return to that slide, Bajaj and KTM didn't put up that slide because they think they can 'recruit' the whole Royal Enfield following. They are simply making a pragmatic point here.

You see, Royal Enfield enjoys the Indian automatic association of displacement with power. 350cc must be greater than 150cc and 500cc trumps all. This is further bolstered by the fact that our RTOs have traditionally filled in the cc figure in the power column on the registration documents. Even today, My 200 Duke registration card has the cubic capacity column filled in correctly but the power column is empty.

Whether you like it or not, there are more than a few less-informed motorcycle fans out there who think buying the Enfield 350 or 500 gives them the most powerful motorcycle possible. Unfortunately, while they do get a lot of good things from Royal Enfields, outright power has never really been one of those things.

By showing a 375cc motorcycle on the slide, Bajaj is reinforcing the idea that the Enfield 350 even in this twisted world isn't the toast of the 'power' segment anymore. And to those who are better informed, the stark difference in the power, torque and weight columns between the Enfields and KTMs should mean a lot. More importantly, perhaps, Royal Enfield's prospective customers have shown a few attributes that KTM finds extremely appealing.

First, REs are expensive and their buyers are naturally showing off both that they have the means and that they are willing to dispose their disposable incomes on motorcycles. Every premium segment product should target them as a natural consequence, KTM just happens to be the first direct shot at this bulls-eye.

Second, REs are leisure motorcycles that attract a more affluent, older crowd and off late their motorcycles have taken cognisance of this, I'm looking at you Classic. But this crowd is also the one who is currently stuck in epic wait queues. Royal Enfield is bringing to bear serious effort and investment to bear on cutting the waiting times and reaping the rewards of being able to supply product quicker.

I believe KTM thinks of the customers who really want only the power or performance and are unwilling to wait the low-hanging fruit which can be picked off easily. I further think that Bajaj is shrewd enough to suss out the fact that there will even be hardcore fans who've done the whole nostalgic thing long enough for them to be looking at other things. Looking for an upgrade. The 390 Duke is a very reasonable other thing/upgrade on every count.

Is it all doom and gloom for RE then? Oh no, India is way too vast a market for two manufacturers to not be able to survive more than comfortably in the long run. We have too many motorcyclists and currently, not enough choice. The 390 is a step in the right direction but it doesn't substantially change that reality.

RE will find new legs and new customers when the Continental GT comes out. I believe the new frame and engine will prove to be an good combination. It won't be a full-on modern motorcycle in nature or feel most likely but, then again, it doesn't have to be. 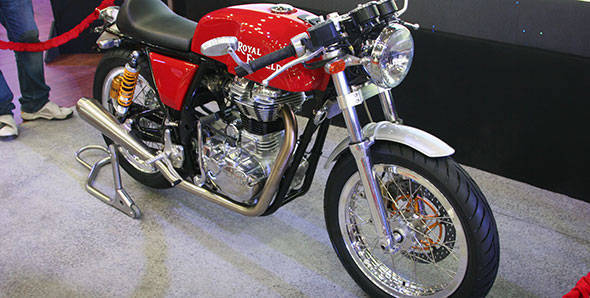 If Royal Enfield can capture all the charm and grace of the olden days with a decent enough extra dash of performance and handling, the Continental GT will be a success. If it can bring Royal Enfield to the point - and I believe it will - where the new plant has to run to keep up with demand, it will be job done.

Don't make the mistake of thinking this will be easy for Royal Enfield either. One of the hardest challenges for motorcycle engineering can often be legacy rather than metallurgy or cost. Royal Enfield knows this very well and the Continental GT is a startlingly different approach to product development for the company.

You can be sure that what RE will learn about quality, development, pricing and performance from the Continental GT will not be restricted to that one model either. The Chennai company is finally moving forward with significant momentum. The new plant is a huge step forward as is the Continental GT. And I see no reason why the momentum will dissipate.

I am convinced that a few Royal Enfield loyals will either add a KTM to their garage or switch out their old thumper to the 390. But substantially, the core fan base will not waver. And Royal Enfield, to their credit, is hard to work ensuring that these fans have something to upgrade to as well.

And that in a nutshell is what it is about. If you, as a motorcycle maker, want people to remain in your family, you must ensure I have something to upgrade to within your fold. Or else I'll move on.