It felt good to ride back from IBW. I wasn't alone as I had been on the way out. My new KTM, Ferocitas, was buzzing along peacefully and I was on a highway full of motorcycles. The sheer number of motorcycles meant that out on the golden quadrilateral, most cars and trucks were watching for us and giving way without any resistance, which made for fast, safe cruising. And all along the highway, kids lined up to see the bikes go by, cheering happily as they rumbled past. But there were other things I noticed, some good things, others not so much. 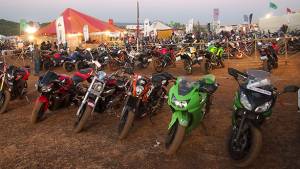 It's almost as if the sportsbike mounted squids forget that they have brakes. They'll usually come upon you really fast and then want to pass instantly. Most will not even flash you, they'll just buzz by going 600kmph four inches away. You know what that does? It makes everyone think, justifiably, that if you ride a plastic-clad motorcycle, you're ill-behaved, badly brought up and basically, the school bully. Never confuse superior machinery with right of way. Never let 200PS get in the way of basic courtesy and safety.

The cruiser guys are the other extreme. They're happy to chat when stopped but have weird ideas. Like safety on a motorcycle is a function of having connected intercoms in their helmets so they can talk to each other. Santa-Banta jokes out on the open road? They also think that if you ride in formation at precisely 100kmph, they're automatically safe. These groups will usually hold up traffic, ride wobbly at slow speeds and with great pride get nowhere in a hurry.

There are more wannabes than motorcyclists

I don't define motorcyclists as people who have a certain motorcycle or the other. I define motorcyclists as people who take their bikes seriously. Seriously enough to understand that their greatest appeal is their ability to give us the power to make life and death decisions at will. True motorcyclists worry about how they're riding and what they can do to improve their skills. And they ride their bikes. They don't get limited by their machines, they get liberated by them. Despite my stereotyping the two kinds of bikers above, I'm not foolish enough to believe that this covers everyone. There're enough people who have sportsbikes and cruisers who have both patience and skill but like the Indian enthusiast's voice is lost in the clamour of the appliance motorcycling masses, their individual skills and abilities are lost in the sea of squids and wobblers. 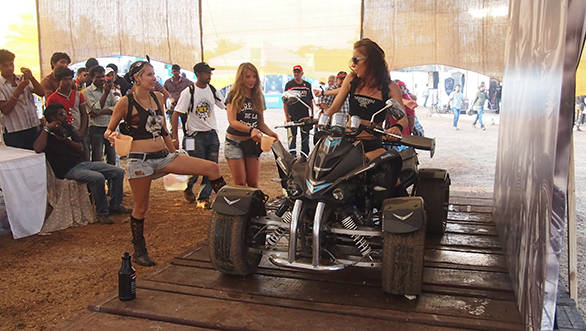 They quietly appear as props in advertisements and transmogrify into all manner of odd things in some movies but inescapably, motorcycles are cool. People want to be associated with them and that image. At the 2014 India Bike Week there were, for the first time, a lot of couples enjoying a weekend together, families with kids and in some cases, families with grandparents and more. That, to me, is a great thing, something we should be proud of and encourage.

And yet strangely, it wasn't enough to have a ticket or pass to get into the IBW. In a feat of epic shortsightedness, the organisers decided that the bikes must have their own pass as well. Something that only became clear when you tried to penetrate the defences the second time around having acquired your own "human being" pass. This sucks. If a motorcycle cannot enter India Bike Week, something is fundamentally broken.

I saw many choppers at the IBW. And they look glorious with their lurid paintjobs, raked out forks and long-low styling. But then I caught various people trying to ride them around the showgrounds and it quickly became evident to me that I would never own one. Bikes do various things for various people, but for me they're meant to be ridden. Most choppers seem to be headed only for one place, the waiting room at the chiropractors. I'm not a fan of this school of motorcycling. When you reduce a motorcycle to something you can only ride five minutes at a time, you've lost the plot. It's like having the best ice cream in the world and being allowed only a teaspoon of it at a time.

I met many, many people at the IBW. Some I've met before and others are people who've read my ramblings and still others who were complete strangers. I discovered that having motorcycles in your life makes people nicer and more interesting. If I had a buck for every minute I spent at the festival having an animated, interesting chat with someone or the other, I'd be a millionaire.